By Jennifer Gilderman, Rhiannon Mim on October 26, 2007 in Football, Sports 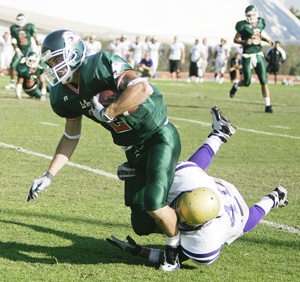 The University of La Verne football team fell to Whittier during the Homecoming game Saturday. Wide receiver Ryan Cofflet made a gain of two yards towards the end of the fourth quarter, before being tackled by the Poets’ Brett Barstow. The Leopards lost 31-28, with a final 59-yard field goal attempt in the last few seconds of the game. La Verne’s overall record now stands at 0-6. ULV will play at Redlands tomorrow at 1 p.m. before returning home to play Claremont-Mudd-Scripps the following week. / photo by Rhiannon Mim

With the buzz of Home­coming in the air Saturday, the La Verne Leopards made their strongest push yet to break their season-long losing streak against the Whittier Poets, only to fall short as Taylor Hart’s potential game-tying field goal sailed wide left with 10 seconds left in the game.

In front of a crowd of 1,100, the Leopards went home with their sixth loss of the year, 31-28, dropping La Verne’s record to 0-6 overall and 0-4 in Southern California Inter­collegiate Athletic Conference play.

Whittier improved its record to 3-3 overall and 2-1 in SCIAC.

The Poets got off to an early start with a scoring drive on their first possession of the game, taking the lead, 7-0.

However the Leopards quickly retaliated when quarterback Troy Doolittle connected with junior receiver Grady Thomas in the end zone for a 21-yard pass, tying the game at 7-7.

In the second quarter La Verne took bigger strides when Doolittle tossed to senior tight end Anthony DeJager for a 40-yard touchdown and Charles Lacy added another seven points increasing their lead to 21-14 heading into halftime.

La Verne maintained its momentum at the beginning of the third quarter when a screen play had senior running back Chris Handy race past the Poets’ defenders for a 70-yard touchdown.

But just like every movie has a twist, this Sandlot team could not ward off the Whittier Poets as they continued to fight back.

“We got comfortable,” Doolittle said. “I think we need to learn to finish games and protect the lead.”

But the fourth quarter would bring the most excitement and intensity when Whittier defensive back Sean MacNeil picked off a Doolittle pass, giving the Poets excellent field position to set up their offense.

Eight plays later Shurlock ran into the end zone to give Whittier the lead, 31-28.

However, La Verne continued to drive down the field with five minutes remaining in the game.

A crucial roughing the passer penalty against Whittier proved to be pivotal as it set the Leopards with good field position on their final drive of the game.

After a reception by junior receiver John Ausman and a lateral to receiver Phi Van Le, the Leopards set up the final attempt for the field goal.

With seconds remaining, the Leopards left the game on the shoulders of Hart with hopes of sending the game into overtime by making a 59-yard field goal.

The crowd rose to its feet, and the La Verne sidelines filled with excitement as Hart’s amazing kick sailed into the air with the right amount of distance, but went wide left by a foot, sealing the win for Whittier.

“There were timely penalties that cost us some field position on that last drive,” Doolittle said.

Many La Verne players did have notable individual performances throughout the game.

Doolittle threw for a career high of 419 yards, completing 34 of 51 pass attempts.

Additionally Handy received game-high honors with 111 yards on the ground.

DeJager added another 85 yards, while Thomas had five catches for 62 yards for the Leopards.

“I felt we played well for most of the game,” Doolittle said.

For the defense, junior linebacker Jason Carpenter led the Leopards with nine tackles.

The Leopards finished the game with 450 yards of total offense while the Poets accumulated 335 yards.

But the statistical advantage was not enough to net the Leopards their first victory of the season.

Yet this team is still in transition, with new young players and a new head coach.

“It’s a good atmosphere and we’re working well together,” Stragier said. “But other teams that we’ve been playing have had a lot more time to mesh together, where we just began in August.”

“Obviously everyone is disappointed,” Doolittle said. “But we still need to finish strong.”

La Verne has three more chances to try and capture its first win of the season.

The Leopards will attempt to do so 2 p.m. at Palm Desert High School as they go on the road to take on the Redlands Bulldogs.

Following the matchup against Redlands, the Leopards will return home to play Claremont-Mudd-Scripps on Nov. 4. ULV will play its last game of the season at Ortmayer Stadium against Chapman on Nov. 11.