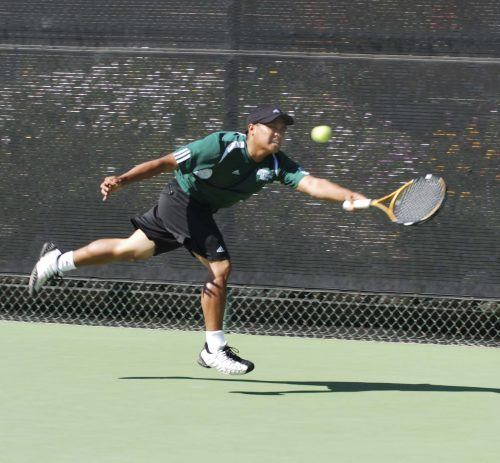 The University of La Verne men’s tennis team played three games in the last week, claiming a victory over Biola on Saturday in a 6-3 game, snapping a three-game losing streak.

La Verne lost to Sewanee 6-3 on Monday, and was defeated again, this time by Lake Forest College in a close 5-4 decision Wednesday at home.

The men competed against Biola and the group took a 6-3 win, taking an impressive four out of six singles matches and snatching two out of three double matches.

J.P Arreglado and Alex Muresan won their No. 1 set, facing off against Daniel Westman and Colin Snow of Biola.

However, ULV could not keep winning in their matches following the win over the Eagles.

After a day’s rest, faced their next opponent, Sewanee, who is currently ranked No. 29 nationally.

When the Tennessee team arrived, La Verne fought a battle against the team that defeated Cal Lutheran in a 5-4 decision earlier in the week.

Despite stellar performances by Richard Delgado and Mario Backus, La Verne lost in a 6-3 outing against Sewanee.

“We lost, but look at it this way, we did pretty well against a team that took down Cal Lutheran,” Head Coach Don Flora said. “And Cal Lutheran beat us 9-0.”

Muresan and Arreglado won their doubles match against Sewanee in a 8-6 decision, the sole victors in doubles with Sewanee winning against the team of Delgado and Backus and Evan Mobley and Adrian Laygo.

“It felt good to win that,” Arreglado said.

The La Verne team gave a hard fight to Lake Forest College, where Muresan and Arreglado were the only team to win their doubles match.

Following an active week, the team will also host two more games at The Claremont Club, their home courts this season over the break.

Dan Sayles can be reached at dsayles@ulv.edu.