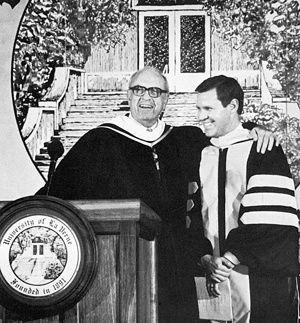 Kyhl Smeby congratulates ULV President Stephen Morgan in 1985 at Morgan’s inauguration. Smeby was a member of the Board of Trustees from 1976 until his death. / file photo by Jim Black

Kyhl Smeby, a long-time member of the University of La Verne board of trustees, died on Jan. 14. He was 88.

A graduate of La Verne College, Mr. Smeby died at his Pasadena home following a period of declining health.

“He really was an extraordinary trustee, “ said University President Stephen Morgan. “Kyhl was the chairman of the board during a very difficult financial time for the University during the mid and late 80s.”

“It was really his strong leadership that helped bring the University through that difficult period,” Morgan said.

Mr. Smeby was elected to the board in 1976 on which he later served as the chairman of the board from 1980 to 1989. Until his death, he continued his service as a board member.

“Kyhl Smeby was very conscientious and thoughtful. I always enjoyed his contributions to us,” said Richard Gelm, professor of political science, who served as faculty representative to the board of trustees.

Gelm said he appreciated the contributions Mr. Smeby made to the University.

“I always found him to be really present, Gelm said. “I thought he had the best interest for the University.”

“He helped the board make some tough decisions. He worked closely with administration and he really helped steer the University in a positive direction,” Morgan said.

According to a letter Morgan sent to the ULV community shortly after Mr. Smeby’s death, Mr. Smeby wore many hats during his lifetime. He served on the board of the Art Center College of Design in Pasadena and as a member of the executive committee of the Association of Independent California Colleges and Universities.

President Morgan wrote in the letter that Mr. Smeby was active with various organizations.

According to the letter, Mr. Smeby was chairman of the Board of Directors at KCET Public Television. He was also a director of the Golden State Minority Foundation and a director and chairman of the Music Center Opera Association. Mr. Smeby also served as President of the Greater Los Angeles Visitors and Convention Bureau.

President Morgan credits Mr. Smeby with making connections to many of the California foundations that have donated to the University throughout the past 20 years.

“His opening those doors resulted in a lot of sizable financial contributions to the University of La Verne,” Morgan said.

Current chairman of the board Ben Harris saw Mr. Smeby as a vital chairman to La Verne history.

“He was probably one of the best over the years since I’ve been on the board,” Harris said. “He was obviously a very dependable guy and he worked through some very difficult times.”

Harris admired Mr. Smeby’s approach to the board.

“Mr. Smeby served with dedication on the ULV Board of Trustees for many years,” Melleby said in an e-mail.

Melleby said that she and Mr. Smeby returned to college as adults with careers. Melleby considered him a pioneer for education.

“ULV’s interest in attending to the educational needs of the adult learner had a great impact on Kyhl,” Melleby said in an e-mail. “He benefitted greatly from his ULV experience and became one of our greatest advocates and a distinguished member of our Board. He will be missed.”

According to President Morgan’s letter, Mr. Smeby was awarded the honorary degree Doctor of Humane Letters in 1983.

Mr. Smeby retired as an executive vice president of Bank of America in in 1986 after 46 years.

A memorial service was held on Jan. 24 the San Marino Community Church in San Marino. He is survived by his son John Smeby.

Semesters extended one week
Life in the unemployment line