By Jaclyn Dino, Jonathan Smith on October 5, 2007 in Football, Sports 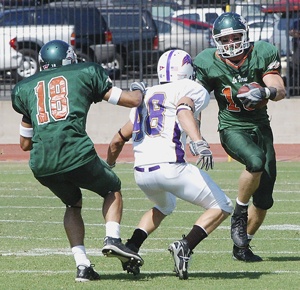 Michael Moreno, a senior wide receiver, helps senior tight end Anthony De Jager in the third quarter pull away from Cal Lutheran Kingsman Eric Lopes. De Jager gained a total of 96 receiving yards. After leading the Kingsmen, 10-7, at halftime, the Leopards eventually lost to Cal Lutheran 45-24. With a record of 0-3, the Leopards will face Pomona-Pitzer at Claremont on Saturday. After the Sagehens, the Leopards will be on the road against Occidental on Oct. 13. / photo by Jaclyn Dino

After leading the game before the half, the La Verne football team suffered another loss at home to the visiting Cal Lutheran Kingsmen on Saturday.

“It’s always rough when you lose but we made progress to our ultimate goal,” said junior receiver John Ausman.

While the game was close in the first half, the Leopards could not stop Kingsmen quarterback Jericho Toilolo, who completed 32 of his 39 pass attempts for a total of 464 yards and six touchdowns.

“Cal Lu was strong the whole second half,” senior offensive linemen Albert Perez said. “ They didn’t let up at all.”

The Leopards were the first to score, leading the Kingsmen 7-0 off senior Chris Handy’s 3-yard touchdown.

The Kingsmen quickly jumped on the board following the Leopards touchdown.

Toilolo connected with receiver Brandyn Bennett for a touchdown pass of seven yards.

But the Leopards were able to drive down again to score on a 42 yard field goal by Taylor Hart, leading 10-7 at the half.

The Kingsmen came out hungry after the second half. Kingsmen kicker Connor Pearce converted a 34-yard field goal to tie the game on the Cal Lu’s opening drive.

The Kingsmen then scored 14 unanswered points on two drives. One drive finished with a pass by Toilolo that was tipped by a Leopard defender and landed in the hands of Bennett for an 83-yard touchdown.

Bennett ended the game with seven receptions for 186 yards and four touchdowns.

The Leopards were able to cut the lead to seven twice, but they were unable to stop the Kingsmen on offense and overcome the deficit.

On offense, the Leopards failed to make the best of the opportunities.

On the ground, junior tailback David Merlos was the leading rusher for the Leopards, rushing for 89 yards on 18 carries.

Senior tight end Anthony De Jager was Doolittle’s big target of the game, catching 10 passes for a total of 96 yards.

Junior receiver Grady Thomas also was a deep threat in the second half, catching a game total of seven catches for 97 yards.

“All we can do now is look at the film and see what we need to fix,” Ausman said.

Defensively, the Leopards played solid during the first half. After the half, the Leopards saw the lead disappear, as the Leopards were not able to make the big plays they needed.

Although the game registered as a loss, the Leopards have high hopes for the future.

“We look like a completely different team, then when we started,” Thomas said.

They hope to use their experiences to compete against Pomona-Pitzer tomorrow.