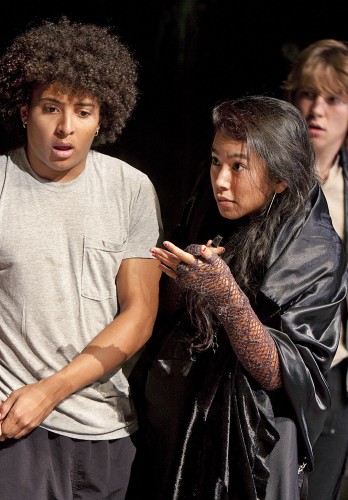 Gang leader Greta, played by Stephanie Aguilar, intimidates her fellow gang members Cone and Fak, played by Danny Bride and Raymond Del Rio. “The Sport of My Mad Mother “ takes place in an abandoned and crumbling theater in a run down and crime-ridden neighborhood. The play has an unconventional set, where audience members sit onstage below draped nets. / photo by Jakeh Landrum

‘The Sport of My Mad Mother” is not your typical play.

The story combines gang violence, an abandoned theater and climbing on nets above the stage to provide an experience the audience has never seen. The theater department opened the play Thursday at 7:30 p.m. in Dailey Theatre.

“We want the audience to come in with an open mind,” said Stephanie Aguilar, sophomore theater arts major who plays Greta.

The original play was written by Ann Jellicoe, and it has been adapted to be more relatable to the ULV audience.

Instead of the original England, the play takes place in modern day Pomona as a series of gang fights are occurring outside of the abandoned theater, which has been turned into a makeshift hideout.

Director Steve Kent selected this play because of its relevance to students today, it is rarely performed because of strong subject matter.

Because of the complexity of the script, the cast has been working since late September to perfect the play.

“Before we start staging, we go through the entire script to find intentions behind the words and to look beyond the text,” Aguilar said.

Instead of sitting in the normal seats in Dailey Theatre, the audience sits on stage right, while the cast performs in the stage left corner, as well as on the nets suspended high above the audience.

“I went running and worked out a lot because we have to be physically fit to climb,” said Raymond Del Rio, the sophomore theater arts major who plays Fak.

The set was designed by ULV alumnus Matthew Hill.

“It has been great collaborating,” Aguilar said. “I’m happy to see other people from other departments work with us.”

The live sound effects add another facet that is not normally incorporated into standard plays.

“The live band gives the audience something to look at and is a lot more creative,” Escañuelas said.

With all of these techniques, the performers hope to engage the audience with the performance.

“I think a lot of it involved the audience,” said Teresa Beardsley, the sophomore theater arts major who plays Patty.

The play features swearing and smoking, and is recommended for mature audiences only.