By Christopher Guzman, Megan Sebestyen on November 12, 2010 in Arts, Etc. 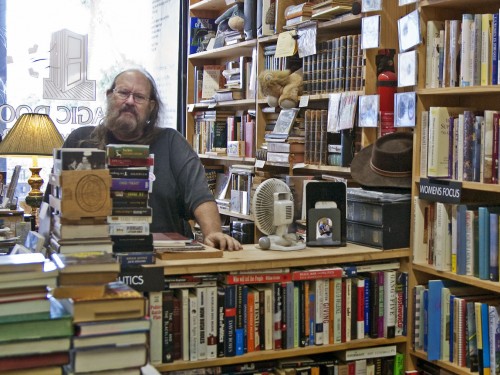 Dwain Kaiser, owner of the Magic Door IV Quality Used Bookstore in Pomona, celebrated the fifth anniversary of his store’s opening in June with a 30-day discount sale. The Magic Door is located on West Second Street in the Pomona Arts Colony and has become a popular stopping place for people shopping, visiting the art galleries, or attending a show at music venue The Glass House. / photo by Christopher Guzman

The Magic Door IV Quality Used Books in the heart of the Pomona Arts Colony has more than just an impressive collection of books.

The store, run by JoAnn and Dwain Kaiser, who collaborate as the co-owners, also holds a wall of hundreds of CDs signed by big-name bands.

Music fans as well as literary types can be found buzzing around the store.

“My wife has always wanted to be in a bookstore, so we decided to open one together,” said Dwain Kaiser.

The story behind the bookstore though, is much longer than that. Dwain Kaiser operated three bookstores named Magic Door Used Books before this – giving each a sequential number.

“I came into Magic Door II as a customer and we got married at the end of Magic Door III,” said JoAnn Kaiser.

And now, this bookstore, which sits across the street from The Glass House in Pomona, has become a literary and music lover’s haven.

Because of the location, many music fans come over before shows at the venue.

“It’s a wonderful thing for the business. Its one of the reasons we picked this location,” JoAnn Kaiser said.

Because bands spend so much time touring, they also come in the bookstore to buy reading material for the road.

Bands like White Rabbit, The Faint, Wilco and Vampire Weekend have all bought books here and left autographed CDs for the bookstore to recount their visits.

“At the beginning we didn’t even think about asking for autographs, but then people didn’t believe the artists were in here, so we started getting them to sign their albums,” JoAnn Kaiser said.

Now the evidence that many bands have been in is clear; nearly 200 signed CDs line the back wall of the shop above the register.

During show nights at The Glass House, the Kaisers close up shop and head over to get in line for tickets.

“We love the concerts and the shows,” Dwain Kaiser said. “We take in one or two shows a month.”

Because all of the surrounding businesses have made the store part of the neighborhood, JoAnn said she is glad they found this location.

“They’re wonderful and they fit in the downtown Pomona community,” Shawn Curley, an employee at the nearby La Bomba Thrift Shop said. “I’m always over there.”

Though the bookstore may appear small in size, the selection is anything but.

“We carry a very large selection of sci-fi, policy and new age. We carry everything,” Dwain Kaiser said.

“We have a really nice section of children’s books and young adult material.”

The Kaisers are known for their knack for recommending the perfect books to customers.

“Not only are (the Kaisers) book lovers, they’re archivers of different books and stories,” Curley said.

The bookstore is just the right size for the Kaisers.

“If this building was 50 times bigger than it is now, I could fill it up no trouble,” Dwain said. “My wife and I wanted a store we could handle ourselves and take care of and know what books were selling.”

The selection of books in the store is special to the Kaisers. All of the books are hand-picked and the Kaisers even bring in books they’ve read and finished.

Some of the books come from charities while others are the results of trade-ins from customers.

Both the Kaisers agree it’s hard not to take home every book that comes across their paths.

But, Dwain Kaiser said: “We know the rest of the books will have a good home.”

“Before we opened the store, I used to joke that we lived in a combination library/art gallery,” JoAnn said.

Megan Sebestyen can be reached at megan.sebestyen@laverne.edu.