By Allison Lavelle, Danielle Navarro on October 14, 2011 in Soccer, Sports 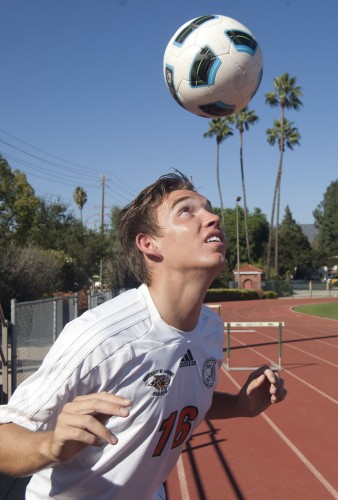 A native of Stavanger, Norway, freshman midfielder Boye Christiansen made the decision to attend the University of La Verne because he said he wanted to try something new. Being part of the men’s soccer team has helped him make friends and adjust to his new life in a foreign country, but he said that the style of soccer is different than in Norway. Christiansen scored his first goal of the season in sudden death overtime against Pomona-Pitzer on Wednesday. / photo by Danielle Navarro

Boye Christiansen became restless with his normal routine, so he packed up his soccer ball, said goodbye to his family and traveled 5,000 miles away from his native Stavanger, Norway, to find a new stomping ground in La Verne.

He began to look for somewhere he had not been to earn his college degree, and after a few years of searching and planning, he decided to make ULV his new residence.

“Who can resist sunny California?” Christiansen said. “I love it here, I can’t complain.”

La Verne proved to be just what Christiansen was looking for when he decided to come to the United States.

“I like the place the most,” Christiansen said. “It is a small, quiet community but close to Los Angeles so you still have all the excitement of a big city.”

Although Christiansen has been in the United States for only two months, he speaks fluent English, is adjusting well to his new home and has discovered that it is not too culturally different than his hometown.

“It’s kind of like back home but it has its differences,” Christiansen said. “The highways here are much bigger.”

Being so far from his family in an unfamiliar place has not been a problem either.

“It has been smooth sailing,” Christiansen said. “The people are nice and the school takes good care of me. I miss my family but I’m doing OK.”

The 19-year-old is also glad he found a place where he can not only focus on earning his degree, but is also able to play the game that he loves.

The business administration major may be in his first semester at La Verne, but he is no stranger to a soccer field.

Christiansen cannot remember a time in his life that he did not play soccer and has been playing on organized teams since he was 4 years old.

It made perfect sense for him to join La Verne’s team upon his arrival.

“The team is basically my family here,” Christiansen said. “I really like playing with them.”

Senior defender Wesley Lucas noted how helpful Christiansen has been to the team in the midfield and distributing the ball.

“He is also our free kick taker and he has been doing a great job of that,” Lucas said. “He is a team player and we all love hanging out with him. And his accent is awesome.”

“Christiansen has been a great addition to the program,” men’s soccer head coach Crescencio Gonzalez said.

Gonzalez has not only found Christiansen making a difference on the field, but off as well because he brings a new culture to the school.

“I am a firm believer that the emergence of other cultures helps our students and athletes become more well-rounded,” Gonzalez said.

Even though soccer is supposed to be played the same around the world, Christiansen has noticed differences between the way the game is played in Norway and the United States.

“It’s more physical and fast-paced here,” Christiansen said. “Back in Norway they focus a little more on skills.”

“Boye brings a different perspective and his style of play is different,” Lucas said. “We learn from him and he learns from us.”

The next game for Christiansen and the team is against conference rival Occidental at 7 p.m. tomorrow at Damien High School.