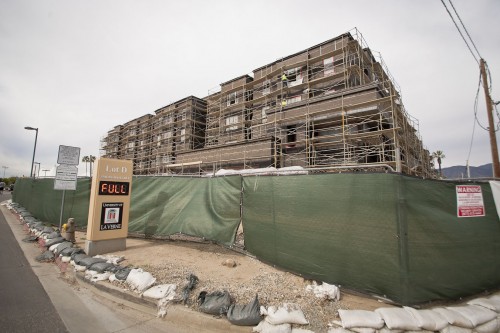 Construction on the new residence center is nearly complete, on schedule for the Fall Semester 2012, as the plaster scratch coat is sprayed onto the walls. Three hundred seventy-eight additional students will be living on campus in the fall, adding to the bustling campus atmosphere. / photo by Mitchell Aleman

In fall semester 377 lucky students will have the chance to engage in a new housing experience.

The new residence hall that has been under construction since summer 2011 is expected to change the way people view the University of La Verne.

“The Campus Center was really transformative when it was finished,” Chip West, senior director of campus planning, said. “This building will be equal to or surpass that.”

The building has been named Vista La Verne and will be the largest building on campus when construction is finished.

Unlike the other residence halls on campus, the housing units inside Vista La Verne will be suites.

For students who have been staying at the Sheraton or living in rooms of three students each, these new living arrangements appear to be an upgrade. 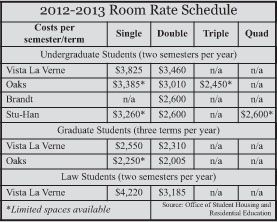 In addition to the housing style, the building will have many other things that The Oaks, Brandt and Stu-Han lack.

Students will be able to use study rooms, computer labs, two elevators, trash rooms on every floor, and laundry rooms with new, state-of-the-art technology also on every floor.

“I think when students come in, they’re going to have a sense of, ‘Wow!’,” West said. “It’s a great project, and I’m hoping people really like it.”

The building will house a total of 377 students; 59 on the first floor with one resident assistant, and 106 with two RA’s each on the second, third, and fourth floors. Students will each have two dressers in their rooms, drawers in all of the bathrooms, and one large cabinet in the common area of each suite to store food or others supplies.

With all of these amenitiesV ista La Verne will also be more expensive to live in than the other dorms. However, Regalado and others did their best to make sure that the cost isn’t excessive.

“One thing we were mindful of was keeping the cost within reasonable range of the Oaks,“ Regalado said.

The introduction of this new residence hall means that the university will no longer have to rely on the Sheraton for housing. And because more students will be able to live on campus, there will be more involvement in on-campus activities.

“I think it is much-needed, “ C.J. Krickl, a psychology major, said. “I think students will benefit from it because it’s actually on campus, it’ll look amazing, and it’ll house more students. “

In these last six months leading up to its grand opening, there is much excitement throughout campus about Vista La Verne.

University employees that were involved in its planning praise it as a huge step forward, not only for the university, but for the city of La Verne.

Danielle Navarro can be reached at danielle.navarro@laverne.edu. 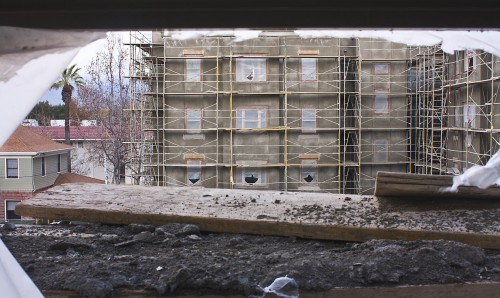 Construction on the new residence hall, Vista La Verne, is on schedule and within budget. The window view is from a south wing, third floor traditional suite, looking north. The Hanawalt House and Wilson Library are on the left. / photo by Christian Uriarte