By Allison Lavelle, Mitchell Aleman on November 18, 2011 in LV Life 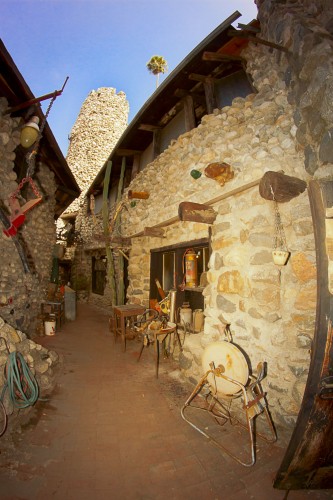 The Glendora Historical Society gives tours of the enormous, multileveled Rubel Castle and provides information about all the interesting and unique artifacts that reside there. / photo by Mitchell Aleman

Hidden in the foothills of Glendora is a castle that embodies child-like imagination, hard work and the spirit of giving.

When I first walked up to the gate of Rubel Castle, I was greeted with a smile by the tour guide and Glendora Historical Society docent, Richard Macy, who gave the tour group an overview of the history of the property.

Michael Rubel grew up building forts out of materials he and his friends took from the junkyard, and this desire to construct fantastically quirky playhouses never left him.

When Rubel was a teenager, he was unable to graduate from high school so he convinced a family friend to sell him the two-and-a-half acre property that was originally a water reservoir and a packing center for the local citrus groves.

While working as a school bus driver, and in summertime as a coal stoker on a steam ship, Rubel and his childhood friends worked day and night for 25 years to build Rubel Castle.

Made entirely out of donated materials and random “junk,” the generosity of over 1,000 people helped build the castle, so Rubel did not have to put any of his own money towards building.

From the castle’s creation in 1959 until two years before his death, Rubel made the castle his home.

After Rubel’s death in 2007, the Glendora Historical Society took over the property and has been running it ever since.

Rubel Castle is the ultimate fort complete with portcullis, towers, turrets and gargoyles.

After the large front gate with “Rubelia” written over it opened, there was so much in front of me I did not know where to look first.

There was a Santa Fe train caboose, which was converted into a guest house, with a railroad-crossing gate, stone and bottle buildings and the grand Rubel Castle itself.

Our tour group walked over stone and gravel as we toured the grounds outside the castle walls.

We were shown a memorial cemetery filled with tombstones of loved ones, a couple of Rubel’s classic cars, tin-roofed buildings and heard stories of how everything was built.

Then we were taken through the portcullis of the castle into its center where we saw the first house Rubel lived in on the property, the “Tin Palace,” kitchen and an escape tunnel.

The Tin Palace was my favorite room of the castle. This room is over 8,000 square feet and contained the bedrooms of Rubel; his mother, Dorothy; his grandfather and nephew.

Currently the Tin Palace is the home of several pianos, antique furniture, hundreds of books, model train tables and other various objects that would take hours to discover completely.

When Dorothy Rubel lived in the Tin Palace, she held fantastic parties that even attracted the company of Hollywood actors.

At the end of the tour, we sat in a room of the castle and watched the 10-minute segment from Huell Howser’s television show, “California’s Gold,” about the property and Rubel.

Rubel Castle visitors Kathy Connell and Carrie Lawrence have lived in Claremont for 32 years but did not hear about the castle until seeing it featured on “California’s Gold” and were in awe of Rubel’s imagination and care for the people around him.

“I like all the freedom he had to create,” Connell said. “I like that it wasn’t about money.”

“I felt that he had a wonderful heart and he really took care of people,” Lawrence said. “You can’t be a regular person and create something this beautiful.”

Rubel Castle is a truly charming place that made me feel like I had been transported into the dreams of a young boy who wants to be the bravest knight in the kingdom.

I found myself being inspired by Rubel’s endless imagination and desire to never grow up.

Individual and small group tours of Rubel Castle are given on the second Tuesday and third Friday of every month.

To make a tour reservation, call the Glendora Historical Society at 626-963-0419. For more information about the castle, visit www.glendorahistoricalsociety.org/Castle.html.