A mural on the Second Street side of Wilson Library represents the University’s mission of having a supportive, diverse and inclusive environment, where students of all backgrounds benefit from sharing their life experiences and viewpoints with other students, staff and faculty.

It took the creation of student and faculty lead councils, and a year’s worth of meetings, to get the mural commissioned. It was completed in late August.

“I grew up near MacArthur Park and didn’t have a car, so I was always on foot and saw murals everywhere,” said Carlos Alexander Yanes, an alumnus who was part of the founding committee that got the mural commissioned.

Yanes and fellow Sigma Alpha Epsilon fraternity member, Gerardo Cuevas, banded together to get a mural that represented the hidden voice on campus.

“We attended a town hall that ASULV hosted,” Yanes said. “And we asked the board of directors for all the possible obstacles we could face trying to get a mural painted somewhere on campus.”

He said after explaining to the board what he and Cuevas had in mind, he got full support from Provost Jonathan Reed, Chief Diversity and Inclusivity Officer Beatriz Gonzalez and Professor of Art History Jon Leaver.

Leaver met Yanes and Cuevas in 2016 when they presented their vision.

“Carlos never felt like diversity was ever really represented on campus,” Leaver said. “And I wanted to help create something that would make them and other students feel at home.”

Leaver worked diligently with the student and art councils throughout a year to decide where the mural would be placed, when it would be painted, and most importantly, who would be the artist.

After interviewing multiple artists, the student council found someone who met their values and they thought would bring their ideas to life.

Kristy Sandoval is a Los Angeles based muralist who focuses on human rights, world affairs and women empowerment. She has painted more than 30 public murals in the last 11 years; some which are in East LA schools.

The mural depicts a 30-foot-tall Hispanic woman with long-flowing streams of blue hair that blend together into a road where figures wearing caps and gowns are shown walking down together.

Her left hand sits on her chest along with a flaming heart wrapped in thorns, as the right hand extends outwards towards the west. And a tree, in full bloom, sits at the bottom.

“The burning heart in the middle is definitely a sign of passion,” Vanessa Mercado, kinesiology major and recent East LA College transfer said.

“(The mural) says the school supports all backgrounds and that means a lot to me.”

Mercado said she hopes the mural helps others feel just as welcomed as she did when she first arrived on campus.

This is just one of four to be painted on campus within the next couple of years. Yanes said the art and student councils will meet to discuss concepts. The next panel is said to be completed by fall 2018. 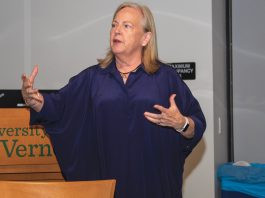 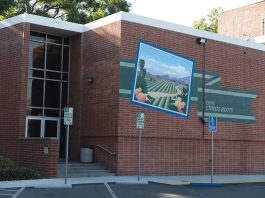 New mural is tribute to La Verne’s past 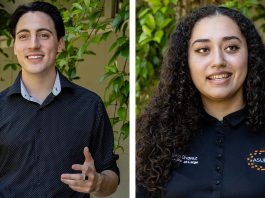