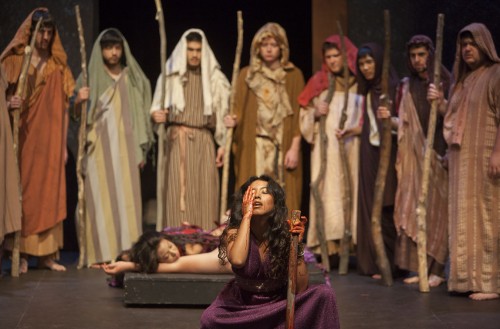 Clytemnestra, played by junior theater arts major Stephanie Aguilar, boasts of the murders of her husband Agamemnon and Cassandra, played by Cody Goss and Lauren Ervin, during the dress rehearsal for “The House of Atreus.” Directed by Georgij Paro, the play is modified from the script originally written by the Greek playwright Aeschylus, who is known as the “Father of Tragedy.” / photo by Christian Uriarte

The Greek drama “The House of Atreus” by Aeschylus is the most recent production by the University of La Verne’s theater department.

Directed by visiting director Georgij Paro, whose past productions here include “Hamlet” and “The Screens,” this play was excellent – and no small achievement.

“This (production) would be a challenge for any company, professional or student, to put on,” Paro said.

In Greek mythology, the House of Atreus is a place where all that reside in it suffer because of a curse from the gods.

Currently living within the house while King Agamemnon is away at the Trojan War, is his wife Clytemnestra and her lover Aegisthus.

Clytemnestra and Aegisthus plot their revenge against Agamemnon for the sacrifice of her daughter Iphigenia and death of Aegisthus’ father.

After Agamemnon returns from his victory in the war, he brings back enslaved Cassandra, a woman cursed by Apollo with the ability to tell prophesies that no one believes.

She tries to warn Agamemnon of the fate he faces if Clytemnestra and Aegisthus succeed in their plan to murder him.

In the end, otherworldly judgment and blood guilt weigh down on the characters, making them squirm under the repercussions they must face.

The play begins with the watchman looking into the distance for a signal on the mountaintops that will announce the fall of Troy.

When Agamemnon returns from war he is expecting a welcome back from his wife Clytemnestra, but instead receives a sarcastic and angry monologue from a woman who is faking happiness only to betray him in the end.

The music worked well with the pace and drama, while the costumes helped authenticate the time and different social statuses of the various characters.

The sets were especially well done, with the front gates of the house of Atreus being the central prop on stage. The position of the audience had them sitting outside the gates and gave the feeling of town members watching a murder trial unfold.

One problem actors had was maneuvering in the more active roles with such heavy or problematic costumes, but this set back did not affect their acting ability.

Everything worked together in a cohesive way making the play that much stronger and fluid as a whole.

Even though this play is within Greek mythology, going in with no background knowledge is not a problem for the audience.

However, this was not the case for the actors.

“I watched movies to see how they spoke and studied for hours on what the words meant,” Jeremy Law, an actor from Rancho Cucamonga who played the Herald, said.

The ability to adapt to the epoch of the play was not the only challenge they faced.

“My biggest challenge was that I have never played a villain before,” Jordan Randall, a sophomore theater arts major who played the role of Aegisthus, said.

“What made it easier was making myself see it in a way that gave me a different perspective where he was no longer the villain but just wanted something different,” Randall said.

“This was my second time watching it and it only gets better,” Katherine Jenson, a freshman psychology major at the University of La Verne, said.

Performances continue through this weekend at 7:30 p.m today and Saturday and 2 p.m. Sunday in the Dailey Theatre.

Tickets are $10 general admission; $8 for seniors, faculty and staff; and $5 for all students.