Just five weeks into the fall 2012 semester, the campus community has already seen the birth of more than eight student organizations this year, from the Pre-Law Club, to Hillel to the Karaoke  Club.

“With the booming number of undergraduate students we have offered a $200 stipend for new clubs to help them get started,” Andrea Naccache, vice president of finance for the Associate Students of the University of La Verne, said.

There are currently close to 50 clubs at the University of La Verne and it is the charge of ASULV not only to approve the clubs’ initial applications, but also to help them realize their goals and support their events though additional funding.

While the stipend was meant to help get new clubs off the ground, not all of the organizations took advantage of it.

“I did not make any plans for the stipend,” Karaoke Club president Daniel Sillas said.

“I would like to get money via fundraising and am going to try my best to look for unconventional venues to help with fundraising,” he said.

Hillel, the Jewish culture club on campus, missed the deadline for club funding, but is still able to use the stipend to fund an important event.

“We wanted to partner with the Interfaith Student Council for medical supplies to be sent to Syria,” Hillel president Caleb Ulrich said. “We were going to request $500 for the event, but instead we are going to use the $200.”

The money that funds these clubs comes from an annual $270 activities fee that is included in students’ tuition.

All ASULV and Campus Activity Board events are funded through this student activities fee.

The first month of each semester, ASULV holds a club round table where club presidents meet.

“We make it as fair as possible and also enrich the clubs,” Naccache said.

This year there was about $45,000 received in activity fees. If all the money is not spent by the end of this fiscal year, June 30, 2013, it rolls over to next year’s budget.

From the $45,000 CAB receives 35 percent of that total, said CAB co-chairwomen Brittany Martinez and Alexandria Orozco.

The remaining 65 percent is given to ASULV and it determine how much clubs get for their events.

If a club is asking for less than $1,800 then is just has to fill out a cost breakdown and budget form. But if it is asking for more than $1,800, then its president must give a five minute presentation to five members of ASULV.

“More of the multicultural clubs ask for more than the $1,800 for their events,” Naccache said.

After the club president gives the five-minute presentation, there is a five minute question and answer session with the ASULV members.

“The Q and A is usually how will the event impact the community and the student body,” Naccache said.

To start a new club, the club must have a president, a faculty adviser, a constitution, a mission statement and a minimum of six traditional undergraduate students. 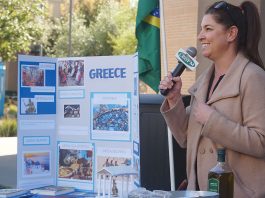