By Christian Orozco, Christopher Mora on February 15, 2013 in News 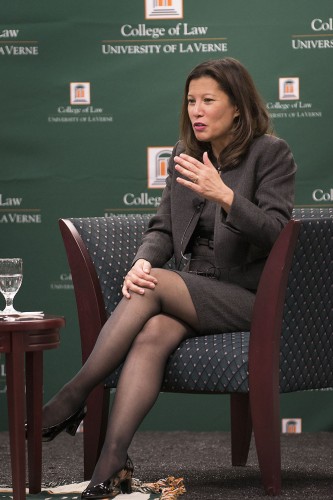 Tani G. Cantil-Sakauye, chief justice of the California Supreme Court, answered questions – ranging from state budget cuts to what the chief justice does in her free time – before an audience of about 150 mostly law students at the La Verne College of Law on Monday.

“You have such potential to do anything, whether it’s in government, politics, business, pro bono, the law,” she said in an on-stage interview conduced by adjunct professor of law Douglas Miller.

“There are so many other things you can do to improve peoples’ lives, to be the voice of those who have no voice,” she said. “(Law school) is the best investment of three years of your life,” she said.

Cantil-Sakauye is the first Filipino American and the second woman to serve as Chief Justice of the California Supreme Court.

Nominated in 2010 by former Gov. Arnold Schwarzenegger, she was sworn into office Jan. 3 of this year.

“You were the right person at the right time,” Miller told her.

The night began with greetings from President Devorah Lieberman and the College of Law Dean Philip Hawkey.

Cantil-Sakauye talked about her earliest recollections of wanting to become a lawyer at a young age when her family was trying to save their home in Sacramento.

“I remember early on my mother going to court and feeling very badly mistreated,” Cantil-Sakauye said. “I remember thinking how she felt she wasn’t treated with any dignity.”

Cantil-Sakauye chairs the Judicial Council of California, the administrative policymaking body of state courts, and the Commission on Judicial Appointments.

Like many other institutions in California, she has had to deal with funding cuts from the courts.

“We live in a democracy, and for our democracy to work the public has to understand the inter-relationship of the three branches of government: the legislative, the executive and the judicial branch of government,” Cantil-Sakauye said.

“You cannot have a fully functioning democracy that serves and protects the rights of its people if you have a substandard judiciary that has been constantly underfunded for five years.”

Cantil-Sakauye not only had judges, lawyers and law students intrigued with what she had to say, but also students who just wanted to learn more about different processes of the law.

“I was looking for insight and guidance to a better understanding of law in general,” Jarred Mendiveles, an undeclared student from Whittier, said.

“How to interpret and rationalize laws in different circumstances,” he said.

Cantil-Sakauye also amused the crowd by telling them what she does in her free time.

She said she waits in line at Target like everyone else and she cherishes any free time she gets, which, according to her, is very little.

The chief justice is married and has two daughters.

Since taking office, there has been one thing that has surprised Cantil-Sakauye.

“I’ve been pleasantly surprised of good people stepping up in times of crisis,” Cantil-Sakauye said.