By Candice Salazar, Christian Orozco on May 18, 2012 in News 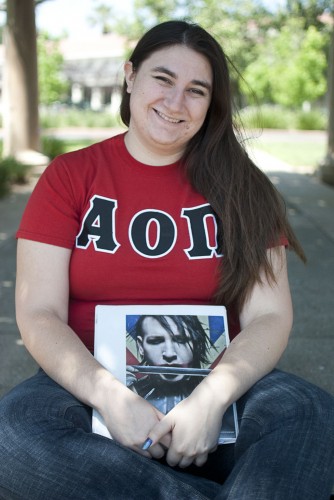 Junior journalism major Christina Collins Burton will serve as Campus Times editor in chief again in the fall. Burton has been a fan of shock rock artist Marilyn Manson since the age of 13. She also loves to read horror and her favorite author is Stephen King. / photo by Candice Salazar

Sophomore journalism and speech communication major Lauren Creiman will take on the position of editor in chief for La Verne Magazine for fall semester 2012, and sophomore radio broadcasting major Corey Smee will serve as program director for Leo FM for the 2012-2013 academic year.

While Junior journalism major Christina Collins Burton, who served as Campus Times editor-in-chief for spring 2012, will return to that post for another semester in fall.

“I’m coming back for the opportunity to work with a bigger editing staff,” Burton said.

Elizabeth Zwerling, faculty adviser for the Campus Times and associate professor of journalism, is excited to have Burton for another semester.

Burton said that her goal is to produce engaging stories and to encourage students to write letters to the editor and respond with their opinions about the articles they read.

“It’s amazing how the editor sets the tone for the semester,” Zwerling said. “And this semester went so well.”

Burton holds many different titles at the University of La Verne, but has a positive mindset for juggling a busy schedule.

“Honestly, I just don’t care,” Burton said. “Stressing over one thing too much takes your attention away from everything else, there is no point.”

To relax Burton says she likes to go back to her dorm room, blast metal music and watch whatever television show she is currently obsessed with, which right now is “Being Human.”

“It’s great when it works out to have the same editor return for a second semester,” Zwerling said. “She will be able to help train the editors and staff writers. Most of them will be new.”

Burton said she also plans to be a staff writer for La Verne Magazine under Creiman. 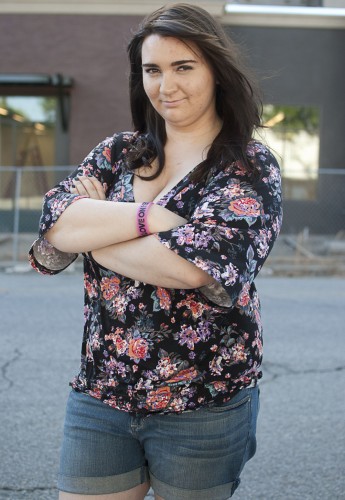 Sophomore journalism and speech communication major Lauren Creiman will serve as editor in chief of La Verne Magazine in fall. Creiman was an editor for Campus Times for two semesters. / photo by Candice Salazar

Creiman, who will serve as editor-in-chief for the fall 2012 semester, has held two editing positions on the Campus Times in the past. While she brings some of her editing experience to the magazine, she knows magazine is a different challenge.

“I kind of figured ‘why not?’ there was no grand reason why I took the position,” Creiman said. “It will be an interesting challenge.”

Creiman expects to step up her game, and hopes to help accomplish creating a better magazine.

“Our magazine has a national reputation as one of the very best college magazines,” said George Keeler, journalism professor and adviser of the La Verne Magazine.

“I expect a magazine that is finished on the deadline and inspirational,” Keeler said.

“Lauren’s distinct talents make her a good choice,” said Jason Cox, senior journalism major and outgoing magazine editor. “George had his eye on her from the beginning, and she’s probably who I would have picked.”

As for Leo FM, a familiar voice will be taking over as program director for the station that plays the most paw-pular music.

Smee, also known as DJ Smee, will be entering his fifth semester on the radio and his first as program director. 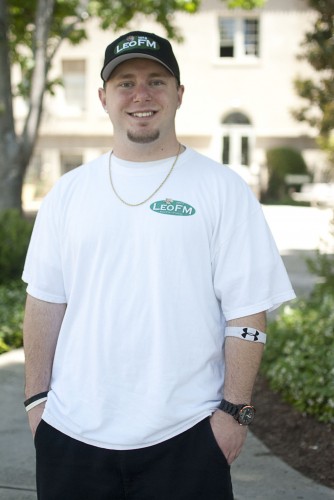 Junior radio broadcasting major Corey Smee will take on the Leo FM program director position. He has been a DJ since he was 15 years old. / photo by Candice Salazar

Smee said he knows how to run a business and he will bring that experience to Leo FM and try to run the radio station like a business.

“I’m going to push for Leo FM to be played in the new bookstore, the Campus Center and Barbara’s Place,” Smee said.

Smee says that Leo FM will have a lot more give-aways next semester.

“We need to branch out to the students,” Smee said.

Smee was the music director for Leo FM this semester.

“I love his energy and enthusiasm,” said Michael Laponis, professor of communications and station manger of Leo FM. “He is dedicated and passionate about Leo FM. He is living out his passion for music.”

“Radio is an amazing experience,” Smee said. “It’s your personality. It brings out a side of you that you didn’t think you had.”

With big plans, Smee adds to the talented group of student leaders in the Arts and Communications Building.

“I don’t want this to be a quiet campus,” Burton said. “I believe the student body should be heard and the only way they are going to be heard is if they act.

“I hope through our media outlets, we will get some kind of a rise out of our peers.”