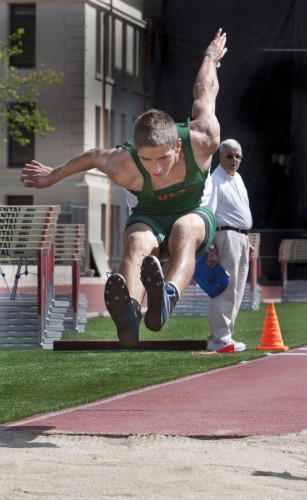 Freshman Nick St. Clair placed second in the triple jump against Redlands and Whittier on Saturday with a jump of 13.04 meters. / photo by Cassandra Egan

It was a fruitful weekend for the men’s and women’s track and field teams as they won three of four total competitions at Occidental on Saturday.

Occidental also competed at the event, but did not compete directly against La Verne.

“This was just a great performance for our team,” head coach Pat Widolff said. “We’re all one big team and everyone did their best.”

“A lot of runners stepped in and did races that they’ve never done before,” senior Michael Sacoto said.

Some of the key runners and field event participants were injured and did not compete.

“It is always upsetting having our top athletes not being able to help out, but that the fact that we finished so close to the defending champs (Redlands) shows this team has grown,” senior Marcus Fortugno said.

On the men’s side, senior Michael Anderson took first in the men’s 110 meter hurdles.

Senior Kevin Brousard threw his way into first place in the men’s discus.

Fortugno highlighted the day while anchoring the men’s 4×4 400 meter relay where he came from behind to catch up to Occidental’s Cole Williams to win the race.

“During the first half of the race, I was focused on beating Redlands,” Fortugno said. “I may have been racing with Oxy, but I focused on schools we were scoring against.”

The Leopards will take part in the Cal-Nevada State Championships beginning at 10 a.m. both Saturday and Sunday at Claremont-Mudd-Scripps.