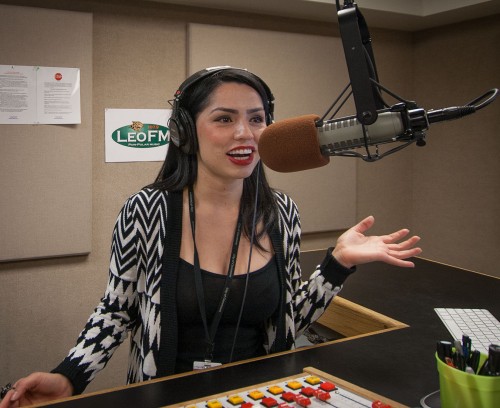 Loren Coronado, a senior radio broadcasting major, won a third place award from the Broadcast Education Association for Festival of Media Arts for an announcement she created for LeoFM. The announcement, aired during October, was for a giveaway featuring tickets to Scandia’s Haunted House. Coronado used a mix of a witch and pirate voice to create the announcement. She is the image and music director for LeoFM. / photo by Nicole Ambrose

Tucked inside the recording room of the Arts and Communications Building, face to face with the microphone, she is fearless.

That’s the idea that Loren Coronado, senior broadcasting major, goes in with everyday as she takes on her duties at LeoFM.

“When I found out I won, I thought that hard work really does pay off,” Coronado said.

“I get an adrenaline rush and I’m in my zone in this room,” Coronado said. “There is no one looking at me here and I can be anybody.”

“When I’m looking at the microphone, its almost like you’re envisioning a person,” Coronado said.

“It can be your best friend, your boyfriend, or even your mom on the other side and that’s what I like to tell the students,” she said.

Coronado always encourages newer students to face the microphone when they first begin.

“Instead of thinking ‘I’m going to sound stupid,’ I tell them, ‘No, you need to just go for it,’” Coronado said.

Many of her peers have expressed admiration of Coronado’s work.

“She’s a great value to the team and doing great things for LeoFM,” Smee said. “It’s an honor watching her grow.”

George Keeler, communications department chairman, said that winning BEA means you are the best in the nation.

“There is a high currency status associated with winning the granddaddy of them all,” Keeler said.

The piece, a promo for Scandia Haunt 2012, was recorded in Coronado’s voice as she tweaked her sound to impersonate the witch inspired by Calypso in “Pirates of the Caribbean.”

“Trying to figure out what kind of voice to use was hard,” Coronado said.

“I thought about Snow White and the evil witch so when I was doing the voice I was imagining her and getting into character.”

After going to voice classes to tune her voice, Coronado coined her witch, ‘Vextoria,’ to help stay in character.

“I didn’t know I could do voices or if I even had it in me until my professor Mike Laponis helped me,” Coronado said.

“He really believed, motivated, and encouraged me and now I have something to share and motivate others.”

“She’s an excellent student and does great creative work and has a promising career as a voice actor.” Laponis said.

As she looks into the future, Coronado wants nothing more than to work at a radio station or in the music industry and do voiceovers on the side.

“(I want to) share my talent with people and use it to motivate others to go for their dreams,” Coronado said.

“You should always move forward, don’t look back, or let anything stop you.”

Monica Dien can be reached at monica.dien@laverne.edu.