By Karleigh Neff, Nicole Ambrose on May 24, 2013 in Softball, Sports 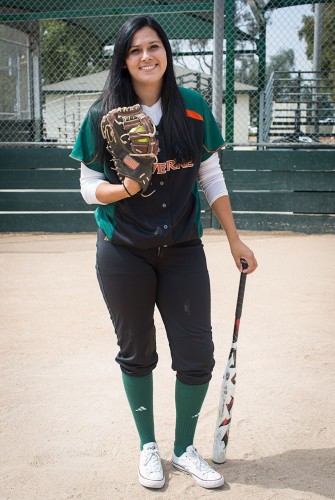 Raven Freret, junior broadcasting major, plays first base for the softball team. Freret started playing softball at age 5 and has not stopped since. For the second consecutive season, Freret was named to the First Team All-Southern California Intercollegiate Athletic Conference. / photo by Nicole Ambrose

It is almost impossible for a competitive college softball player to get on base every time she’s at bat – and end the season with an average of .465 and 31 RBI.

But that is exactly what junior first-baseman Raven Freret did this spring at La Verne.

When Freret was five years- old, her mother signed her up for softball when dance season ended. Once she put the cleats on, the tap shoes were out of the picture forever.

“I fell in love with the sport instantly even at that age,” Freret said. “I dropped everything for softball it was always my main focus.”

Head coach Julie Smith recruited Freret from Sunny Hills High School in Fullerton. Smith has been watching Freret since she was 13, when a close friend started coaching the young prodigy on a travel ball team.

“I saw her grow through travel ball and through high school games,” Smith said. “I always knew I wanted to recruit her to this school, but I was shocked when she chose it.”

According to Smith, Freret could have easily played at a Division I college, but chose La Verne instead.

Freret said her main reason for choosing La Verne was for the communications department. She knew that the department was strong, and she knew that softball was not going to be forever.

“Building a future is important to her,” said close friend and teammate Laura Olson. “She works so hard at everything she does and she’s so intense about it.”

Freret has high hopes for next season. She plans on reaching Regionals and hopefully a College World Series. Raven also prepares every summer for the upcoming season by weight lifting and conditioning, and this summer she is conditioning harder than ever.

“She’s a leader,” Smith said. “I think she is a great role model for the incoming freshmen and younger teammates. I hope they all try and work as hard as she does.”

Freret enjoys going to punk rock concerts on the weekends. She attends as many shows as possible for bands like the Causalities and Face to Face.

Freret also spends a lot of her free time with her mom, who has been at every game and tournament supporting her.

She has a natural talent and ability, according to Olson. She leads by example on the field and never gets upset. Instead, she calmly explains and tries to help and teach.

After college, Freret plans on going into broadcasting.

Specifically, she would like to work with the National Football League and make documentaries and films. She also plans on playing softball in Europe for nine days.

“I know she is going to do amazing things next year as a senior,” Olson said. “I bet she will make All-American and All-Conference.”

Although Freret is sad that next season is her last, she plans on going out with a bang.

“This is what all the seniors have been working for,” she said.