By Karleigh Neff, Nicole Ambrose on November 1, 2013 in Basketball, Sports 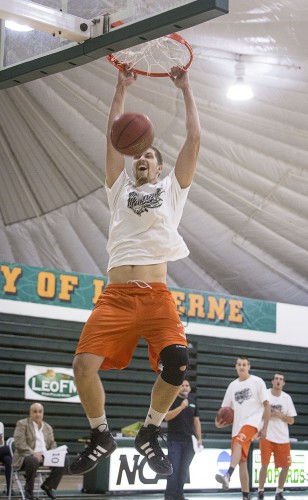 Junior center Niall Harrison competes in a slam dunk contest against his basketball teammates. This was one of many contests preformed as a part of Moonlight Madness at Frantz Athletic Court Oct. 24. Hosted by CAB, the event kicks off the upcoming basketball season. / photo by Nicole Ambrose

Basketball season kicked off on Thursday night for the university as students and staff cheered on the men’s and women’s team at Moonlight Madness.

The hour-long event started off by introducing the teams and coaches.

The women’s team welcomed new coach Julie Shaw who came from Gonzaga University, where she worked as an assistant coach for two years.

Reed hopes to take the SCIAC championship title home this year but also plans on taking one game at a time.

“We love the support tonight,” Reed said. “A lot of people came out and I think this season is going to be really good for us. We just need to stay focused.”

There are 12 incoming freshman for the men’s team this season.

The women’s team is anxious for the season, according to sophomore guard Alysia Trejo.

They have been working really hard and expect to do well this year.

Like the men’s team, the women’s team finished in fifth place in the SCIAC standings last season.

The women’s team has a little more experience than the men’s team this season.

There ae only four incoming freshman for the women’s team this season.

The night consisted of several shooting games between the women and men along with a dance performance by La Verne’s dance team.

Women came out dominate in most of the rounds of shooting.

One of the games consisted of the players spinning around a baseball bat for a minute and then trying to shoot as many three pointers as possible in certain time period.

“We’re excited.” Trejo said. “This is a great way to start the season and show people what we can do.”

The men’s team beat out the women in the spinning and shooting game but fell short in some of the other rounds.

Burrell and Rodriguez were also commenting during the games, providing the crowd with entertainment and laughs.

“I was surprised by how many people showed up,” senior guard Ronn See said. “It was nice to see the support and we are ready to take conference and even make some damage in the state tournament.”

The men’s team is really focused on winning SCIAC this year, according to See.

They have been putting in extra hours as a team to prepare for season, including two-a-days and early morning practices.

The night ended with the men’s team competing in a traditional dunk contest.

Five of the men’s athletes competed for the title of dunk champion.

The men’s team opens up its season at 7 p.m. on Nov. 2 on the road against Southern Utah.

The women’s team starts its season at 2 p.m. on Nov. 15 on the road against Willamette in Oregon.