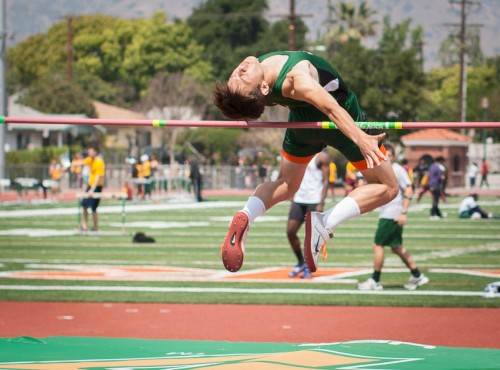 Freshman computer science and engineering major Matt Wheeler competed with four other teammates in the high jump Saturday against Claremont-Mudd-Scripps and Caltech at Ortmayer Stadium. He placed fourth with a height of 1.75m. The next track and field meet is the Pomona-Pitzer Invitational at 10 a.m. Saturday in Claremont. / photo by Nicole Ambrose

The meet was originally going to include SCIAC opponent Whittier. But after the sudden death of Whittier track athlete Alyssa Sialaris the team pulled out.

Many of La Verne’s track and field players wore purple to support the loss of their fellow competitor and friend.

“It really is a sad day,” said head coach Pat Widolff. “We all knew Alyssa. She was a great competitor and just a pleasant young lady. It’s really just hard to believe she’s not with us anymore.”

The women’s victory was an all around effort from the Leopards. In running events, senior Samantha Tucker performed her best, winning the 200-meter with a time of 26.18 and the 400 with a 58.17.

In the 4×100 relay, junior Nicole Crutchfield, freshman Ebony Williams and senior Lili Bolanos joined Tucker for another win with a group time of 48.56.

Bolanos and Tucker partnered with juniors Jasmin Gonzalez and Alysse Thummel for another relay victory in the 4×400, clocking in at 3:58.

“After working for three years, we all have a great connection,” Balanos said.

“We work a lot on hand-offs and the tougher things. We just have a bond, and we trust each other,” she said.

The women stacked up several points in jumping events.

Sophomore Taylor Bernhard also cleared the same height and reached a new personal best, but because of multiple attempts finished second by default.

“We lift and prepare each week,” Coughlin said. “This year I was more determined to make myself better, and we got lucky with a new javelin coach (John Holiday).”

Although the men’s team was not victorious, it still had several solid individual efforts and first place titles.

Senior Ryan Gann took first in discus with a throw of 138-9 and placed second in hammer, throwing 166-3.

In running events, All-American Chancise Watkins did not disappoint.

Watkins was able to beat his personal best in the 400 clocking in at 47.75 but still took second place by only .30 seconds.

“I’ve been putting in a lot of hard work,” Watkins said. “Overall this season has been decent, but I plan on stepping it up to a whole new level for nationals.”

In the jumping events, the men had junior James Francis take first in the high jump after he cleared 6-0.

The Leopards took first and second place in the long jump, with sophomore Jabre Millon taking first with a 23-2, and senior Paul Turner taking second with a 23-1.

Widolff said the team is going hard in practice and training for the next couple weeks before SCIAC Championships on April 27-28 and NCAA Championship on May 23-25.

“We’re doing pretty good,” Widolff said. “The idea is to work really hard for two weeks before finals and go in and dominate.”

The track and field team will compete again at 10 a.m. Saturday in the Pomona-Pitzer Invitational.