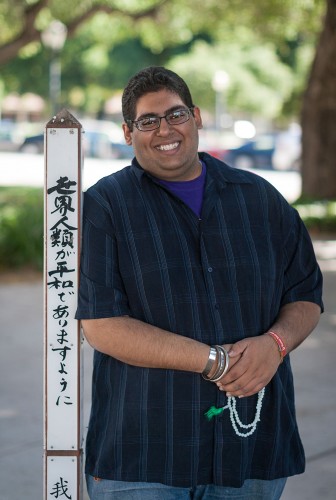 Tahil Sharma, junior foreign languages major specializing in Spanish and Japanese, is involved with many different activities on campus including the Interfaith Student Council, International Student Organization and the Model United Nations. After graduation Sharma says he wants to go into a profession that involves translation and interpretation. / photo by Nicole Ambrose

When junior foreign languages major Tahil Sharma lost both of his grandparents and witnessed the struggle of his immigrant parents in the United States, he realized he wanted to succeed to his fullest potential.

Studying under a President’s Scholarship, Sharma is also a Landis leader and has received many awards of appreciation. such as the Newman Civic Fellows Award this year.

“Sharma does a great job being a leader and is very well organized,” Christopher Ross, junior political science major, said.

Sharma grew up in Culver City, and spent six grade living and going to school in New Delhi, India. He now lives in Claremont.

As the only child of immigrant parents, Sharma found himself being influenced to become the best he could be to honor them.

Because most of Sharma’s relatives lived in Canada or India, he was always very close to his parents.

When he was in high school he thought he would go into pre-med until he found his true calling.

“Then, one day I’m speaking Spanish to my teacher, I’m speaking English to someone else and then my mom calls me in Hindi and we are speaking,” Sharma said.

“I’m like, I love this so much more. I was having three different language conversations at the same time and I loved it, so I figured I must work in languages,” he said.

Sharma is focusing his students on Spanish and Japanese, while also learning Korean and Arabic.

When he has free time in his busy schedule, he enjoys listening to Indian classical music by Zakir Hussain and reading books by Chris Deadman.

“I hope to learn 10 languages before I die and I’m at five right now,” Sharma said.

Sharma is not pleased with the communication with large countries because they are unable to understand each other in cultural and religious aspects.

He hopes to one day guide countries with his international studies.

Sharma will study abroad in Spain this fall – at the Universidad Pompeu Fabr,a and he will spend six weeks this summer in Rome.

Sharma hopes to go to graduate school at the the Monterey Institute of International Studies in California, or University of Geneva in Switzerland.

Philanthropy and diplomacy are Sharma’s passions, he said and he hopes to work in a field where both of these qualities come into play would like to one day pursue a career in.

Monique Parra can be contacted at monique.parra@laverne.edu.