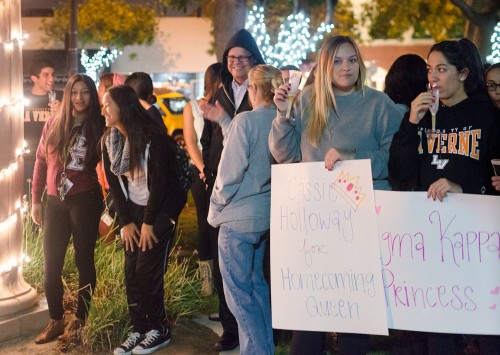 Junior Teresa Crum and sophomore Bianca Rivera wait with the rest of the crowd for the announcement of the Homecoming Court, Monday at Mainiero Square. Celebratory snacks of apple cider and cake pops were offered to those who showed their support to the princes and princesses. Homecoming king and queen 2014 will be announced during Saturday’s Homecoming football game. / photo By Emily Bieker

The Campus Activities Board and University students gave a toast to celebrate the 2014 Homecoming Court and congratulated the finalists during the Illuminations ceremony Monday at Mainiero Square.

CAB hosted the ceremony and revealed the 10 finalists, two of which will be crowned Homecoming king and queen during halftime at Saturday’s football game.

“This is really exciting; it’s my first time experiencing something like this,” said Daisy Betancourt, Homecoming princess and business administration major. “Homecoming is a really fun community event, so it’s an honor to be able to be a part of it.”

The princes and princesses walked one-by-one beneath a tunnel of lights, each having their moment to shine as onlookers cheered. As they made their way down the red carpet Macias announced their names and revealed 1990s-themed fun facts about each member.

“La Verne is my second home, so it’s great to be a part of it and feel so supported throughout the process,” said Steven Santana, Homecoming prince and broadcast radio major. “All of these guys are awesome, so I’d be happy for any one of us to win.”

Before the event began, CAB members handed out apple cider to students so they could participate in the homecoming toast. After the court was announced, CAB lead the toast and congratulated the homecoming nominees.

CAB will announce homecoming king and queen in a surprise 1990s style manner Saturday during halftime at the football game.

“I mean I can’t give it away, but let’s just say it involves a classic ‘90s TV show,” Chris Gonzalez, CAB chairman, said.

The Homecoming festivities will continue at 10 a.m. Saturday, beginning with the homecoming street fair and parade on Second Street.