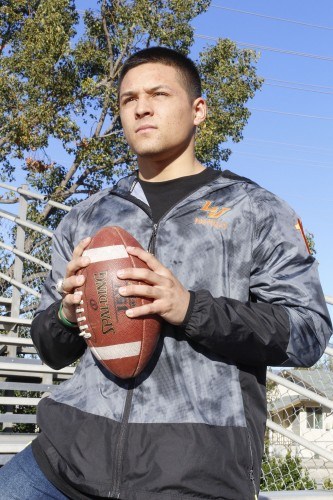 Alex Arellano, senior criminology major, transferred to La Verne during his sophomore year and played football as a Leopard for three years. The senior holds the La Verne all-time record with 124 pass receptions. Arellano and three other La Verne football players flew to Monterrey, Mexico, to play on Team USA All-American Eagles in the Aztec Bowl. / photo by Gabriella Chikhani

The record for most receptions in the Leopards’ football program for 33 years was 123 – until senior wide receiver Alex Arellano decided to change it.

On Nov. 12 during the last game of his collegiate career, Arellano passed previous record-holder Rick Romeo to become the newest all-time reception leader, with 124 career catches.

Although the Leopards had a disappointing season with an overall record of 2-7, Arellano overcame adversity through personal goals as he climbed his way to the top.

“You always want to be not just the best here at the school, you want to be the best in conference, the best in the country,” Arellano said. “That’s something you want to set but you can’t focus on that, you just have to take it one game at a time.”

“Being around the game so long, I think I have a high football IQ and understanding of the game,” Arellano said.

During his sophomore year of high school, Arellano decided to devote his time to football because he thought it would give him a better chance of making it to college.

Although he was a freshman starter for the football team, Arellano found himself wanting to come back to Southern California.

“Personally, I felt like the level of football that I was playing out there is equivalent to what I can get out here, and I can get it close to home where my family can come watch me play. That’s huge for me,” Arellano said.

During breaks his freshman year, Arellano visited La Verne with hopes of becoming a Leopard the following year.

“He’s just a great young man,” head football coach Chris Krich said. “Great grades, quality character type of person, and it was a great fit for us, so we were really excited about getting him – and he was just a very special player too. We knew we had something really special.”

When making the final decision on where to finish his college and football careers, Arellano said that the coaching staff at La Verne compared the team to climbing a mountain.

“You can either just go and be on top and be on a good team that’s already good, or you can come here and help us get to where we want to go and knock them off,” Arellano said.
“I wanted to climb the mountain.”

In the first game of the 2014 season, he ran 70 yards for his first touchdown as a Leopard.

“I think from that moment on I felt like ‘I’m going to have a good time here and do some special things,’” Arellano said.

During the past three years, Arellano has a found a home among his teammates, whom he said he will be friends with forever.

Before each game, they all link arms and walk the field, a tradition Arellano feels is very special.

“Athletically, he’s probably one of the most hard working athletes I’ve ever been around. He always wants to compete to be the best,” senior offensive lineman Jacob Parga said. “There’s a different side to him when he plays sports. He tends to let out more of a swagger when he plays football.”

“He has a confidence in himself that helps him be the best, so I think that’s what kind of helps make Alex,” Parga added. “The nickname that the team gives him is the ‘silent assassin,’ because he is very quiet but when he needs to, he’ll step up and make some of the best plays.”

Arellano said that becoming the all-time reception leader did not initially cross his mind. As a transfer student, he did not think he had a chance to break the record.

“The guys that we’ve had that have broken records for us, they’ve never once said, ‘Hey I want to break that record,’” Krich said. “They’re just like, ‘Hey I just want to do my job and help this team win’ and then the records just kind of come. And that’s the neat thing about Alex, although he broke the record, you would’ve never known it,” Krich said.

With 20 receptions during his sophomore year and 58 his junior year, Arellano was not aware he was about to go down in La Verne history until he was three catches away from setting the new record.

“I wasn’t shocked. Alex has always been like that, even in high school he always excelled,” Parga said. “When he puts his mind to something, he really does accomplish things, especially in the athletics world.”

“I passed him and that was pretty cool. Not many people can say, ‘Hey I passed you,’ and that’s your coach,” Arellano said. “It’s something special that I’ll be able to tell my kids, tell my grandkids, and come back on homecoming or something and show them the record book and I’m in there.”

Arellano said the team is a family on and off the field and that he could go to any of his coaches for anything.

“I just can’t say enough about the type of person that he is. He excels at everything that he does,” Krich said.

“We have an acronym of ‘RYFP,’ which is reach your full potential. That’s not just in football, that’s in everything in life whether it is school, work, football, relationships, whatever it might be.”

“He’s a guy that understood exactly what gifts he was given and made the most of them, and I think that’s what makes him so special,” Krich adde­­d.

For the second year in a row, Arellano was also named to the First Team All-SCIAC, along with senior running back Dallas Parent.