By Conor Holahan, Mia López on May 12, 2017 in Feature Slider, Softball, Sports 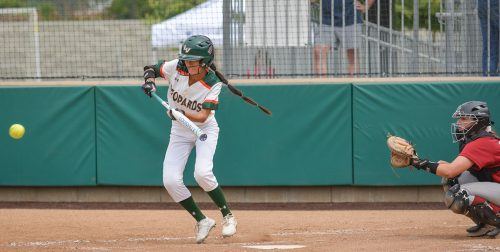 La Verne outfielder Rachel Ogata lays down a bunt in the bottom of the fifth inning Friday, only to be thrown out by Chapman catcher Analisa Ruff. The Leopards defeated the Panthers, 5-0, in the opening game of the SCIAC Postseason Tournament. They advanced to the Championship game where they beat Claremont-Mudd-Scripps, 4-3 and qualified for the NCAA Tournament in Tyler, Texas. / photo by Conor Holahan

The Leopards went into the Southern California Intercollegiate Athletic Conference Postseason Tournament on a high after their last conference win, making them SCIAC champions for the second year in a row. The team only lost one game throughout the weekend, ending the tournament 4-1.

La Verne opened up the 2017 SCIAC Postseason Tournament at Campus West with a win against Chapman. Senior pitcher Hayley Jaquess dominated with a 4-hit shutout to give the Leopards a 5-0 win. This also placed La Verne in the winner’s bracket.

La Verne got an early jump when they scored a run in the first inning. Sophomore outfielder Carly Condon led off in the first inning with a double that put her in the perfect position for senior first baseman Alexis Schiff to bring her home with a sacrifice fly.

The Leopards got the game rolling in the fifth inning when a fly ball from Condon brought in a run.

The Leopards kept the bats steaming in the sixth inning with sophomore catcher Melissa Garcia and Condon bringing in three runs, giving the Leopards a 5-0 win.

“We all want this so bad,” said Garcia. “So, the fact that I could help was amazing.”

The Leopards started off Saturday with tough loss to Claremont-Mudd-Scripps, dropping the game 10-1.

CMS cracked open the game with four runs in the first inning and continued to pile on the runs as the game went on. The Leopards were not able to recover, scoring only one run in the bottom of the first.

In the nightcap, with a combined effort of junior pitcher Elisa Ponce’s stellar performance on the mound and a hungry lineup, the Leopards escaped elimination from the tournament with a 8-0 mercy rule win against Whittier. Ponce threw her first ever no-hitter.

Ponce went into the second game brushing off the loss like dirt on the plate.

Junior catcher Angelica DeAngelo’s stick was on fire as she went 2-for-3 with consecutive 2-run homeruns. She sent one over in the top of the third inning and a final blast in the fourth to give the Leopards 8-0 win.

The Leopards entered the final day of the tournament with a chip on their shoulder as they got their rematch with CMS.

The Leopards trailed throughout the game with a score of 4-1 up until the seventh and final inning. Garcia led off the inning with a shot down the left field, bringing the score 4-2.

A combined effort from sophomore shortstop Shelby Tevis and Condon set the stage for Schiff.

Schiff’s bat once again stole the show when she sent one flying over the center field fence to seal the Leopards victory, 5-4.

“It went up there for them,” said Schiff. “This is all for them.”

The Leopards got off to a rough start in the nightcap championship came against CMS with a score of 3-2, until mother nature got in the way, forcing an hour delay due to thunderstorm.

As the thunder in the sky faded, the storm the Leopards were about to bring was just getting started. Sophomore outfielder Rachel Ogata hit a 2-run walk-off single in the bottom of the seventh inning, giving the Leopards a 4-3 win. This victory also gave La Verne a berth to the NCAA National Championship tournament.

“It feels amazing,” said head coach Julie Smith. “Our returners really built on the feeling we had last year.”

The Leopards will face Texas Lutheran on Friday at 1 p.m. at Texas-Tyler in the Texas-Tyler Regional.