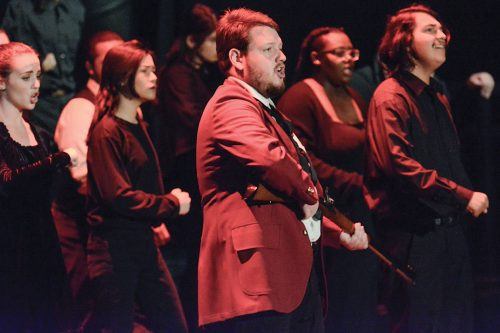 Senior music major Terry Dopson performs as Enjolras in the song “One Day More” from the play “Les Misérables” at the University of La Verne Chorale and Chamber Singers’ Broadway Showcase. The showcase took place in Dailey Theatre Friday and Saturday. The choir performed scenes from 12 Broadway musicals including “Book of Mormon,” “Rent,” “Wicked” and “Rock of Ages.” / photo by Conor Holahan

A colorful backdrop of vivid greens, reds and blues with images from iconic Broadway performances lit up as the University of La Verne Chamber Singers and University Chorale took the stage for their “Broadway Showcase” on Friday and Saturday night in the Dailey Theatre.

“Tonight, you’re going to get a little bit of everything,” Director of Choral Activities Irene Messoloras said to the crowd.

The venue differed from the majority of the choir’s other performances.

“We’re usually singing alongside pianos in Morgan, but tonight we wanted to bring you something different than we’ve ever done before,” Messoloras said.

As the lights dimmed, silence fell over the large crowd that filled the theater. In an instant, poodle skirts and leather filled the stage. The upbeat melody of choir “You’re the One That I Want” from the award winning musical “Grease” accompanied the mixed voices of the entire choir.

As the cast retreated to change for their next piece, six singers remained on the stage. With the rest of the cast behind the curtain, they sang in harmony a tune from “Little Shop of Horrors.”

The songs of the night came from 12 musicals such as “Once,” “Book of Mormon,” “Into the Woods,” “Les Miserables,” “Wicked” and “Rock of Ages.” The songs ranged from jovial tunes to more heartfelt, darker ones. The showcase ended with a rendition of “Season of Love” from the musical “Rent.” The entire cast joined in and the audience participated clapping in time with the music.

In the choir’s performance of “I Believe” from Book of Mormon, senior music major and University of La Verne Chamber Singers bass Adrian Estrada played the Warlord. Although Estrada has worked in theater production for nine years, he was not accustomed to singing show tunes.

The performance was Estrada’s first time participating in a Broadway musical production. Estrada said the choral department has grown significantly, both in numbers and talent, under the direction of Messoloras throughout the past few years.

“I’ve been here since the beginning and there were only five of us then, but now there are so many and it’s turned out really great,” Estrada said.

Professor of Humanities Al Clark enjoys attending the choir’s many performances throughout the school year. Over the last 40 years, he has attended as many productions as he could.  Clark said he was particularly impressed with the Broadway showcase.

“It was absolutely wonderful, not just because of the music, but because it showed everyone’s talent, especially the director’s since there was not only singing but lots of choreography,” Clark said.

Clark said he liked this performance in particular because of the variety of songs.

“It was just happy, uplifting to the soul,” Clark said.

The University of La Verne Chamber Singers and University Chorale will be touring in Europe over the summer.

They will perform at a festival in Germany and Austria.