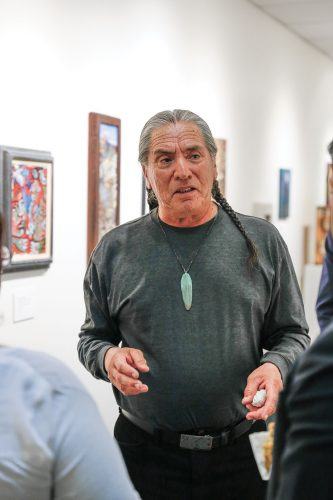 Rogelio Briones, curator of the “Fatal Beauty” exhibit, talks to gallery visitors about the work on display during the reception at the College of Law Tuesday. The exhibit features work from 23 different artists, and will run until May 15. / photo by Breannan Ulsh

A union between art and law seem like an unlikely pair, but the exhibit “Fatal Beauty: The Border and the Sonoran Desert” at the College of Law art gallery shows how the two can work together.

“Fatal Beauty” is a collection of works that expresses the tensions, experiences and emotions that happen on the U.S.-Mexico border.

The exhibit features 23 artists who use media such as photography, painting, video, sculpture and fibers to convey the themes of the exhibit.

One of the artists, David Gonzalez, a first year law student, used photography to document a trip to his father’s hometown of Juarez, Mexico, which is a major point of entry into the United States.

“When I went there I wanted to capture the economic duality that exists in the border town,” Gonzalez said

Gonzalez’s “The Oracle of Juarez,” depicts a young girl standing under the hot desert sun guarding her icebox filled with cool drinks from the unforgiving heat.

“I was just impressed with the sort of drive she possessed to run a business at such a young age,” Gonzalez said.

Other artists depicted the message in more mysterious ways.

Monica Zavala Durazo, from Raices Taller 222 Art Gallery in Tuscon, Arizona, is the major contributor to the exhibit. She uses paper to express her experiences with migrants journeying through the Sonoran Desert.

“I used to volunteer taking out water to parts of the desert for the struggling migrants who were dying by the hundreds from exposure,” Durazo said.

Durazo’s work features over 100 brown paper pods of various shapes and sizes adhered to a wall in the gallery.

She said the wrinkled pods symbolize human beings wrinkled and blistered by the sun, crouching behind mesquite trees out of fear that the oncoming footsteps may be those of Immigration and Custom Enforcement officers. Some of the pods were specifically painted red to symbolize migrants who have succumbed to the harsh conditions of the desert.

College of Law Associate Dean Kevin Marshall said this exhibit highlights the University’s values as an inclusive and diverse institution.

“This collection captures the relevancy of making connections and the obstacles and constraints that we often impose on each other, that often impede those connections,” Marshall said.

As a professor of law and economics, Marshall sees the fiscal effects laws have on the border. He said a thriving marketplace requires its participants to be free and autonomous.

“This exhibit brings attention to the conversation about the law and its relevancy and influence on the human condition,” Marshall said.

Rogelio Briones, the curator of the exhibit, finds the timing of the display to be fitting due to executive actions taken on the border.

“If we can reach just a couple future law students and open their eyes to this reality, when they become lawyers they can aid in the ending of this human suffering,” Briones said.

The exhibit will run through May 15 and is a precursor to the symposium event the College of Law will host later this year.