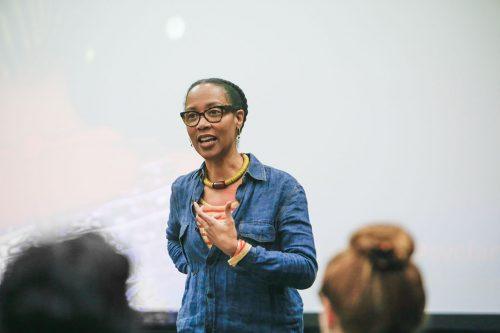 Artist Sonya Clark discusses her work, “The Hair Craft Project” in the Campus Center Ballroom Tuesday. The exhibit addresses the connection between the work of black haircare specialists and studio artists. The exhibit will run in the Harris Gallery until April 27. / photo by Breanna Ulsh

Each hair on our heads holds the complicated history of our ancestors, and is the central theme of Sonya Clark’s artist talk on her exhibit, “The Hair Craft Project,” Tuesday in the Campus Center Ballroom.

Clark is an American artist of both Jamaican and Trinidadian descent and uses many mediums such as textiles, combs, and especially human hair to relay cultural, political and historical messages to her audience.

The exhibit, displayed in the Harris Gallery, focuses on the diversity of Black hair by showcasing hairstyles done by 15 different hairdressers on Clark herself.

The art pieces were composed of 11 unique hairstyles photographed on bright, monochromatic backgrounds of pink, blues and orange.

The photos depicted Clark from behind in the foreground, drawing the eye to the hairstyles, which were created by the different stylists in the backgrounds of each of the portraits.

Clark views the work of hairdressers as art because of their ability to manipulate the fibers that hold our genetic information into intricate patterns with their bare hands.

“I understood at a very young age that I was walking around with art on my head,” said Clark during the artist’s talk.

Clark also uses textiles to convey details of the past with a modern twist, creating a connection between past and present.

This is shown in her piece “Kente Flag,” which takes the traditional design and concept of Kente cloth, a type of textile woven by the Asante people of Ghana that incorporates traditional incantations into the cloth.

The cloth is then combined with elements of the American flag.

Clark then photographed different women wearing the cloth as a headscarf, asking them what they knew of the American flag and the Kente cloth.

“Using textiles to speak is a rich way to connect with one’s ancestors,” Clark said.

“The Hair Craft Project,” documents how hair has been a way to connect with the community on an interpersonal level.

“Getting your hair done is such an intimate act. It is a dialogue between an artist who uses the body as canvas,” Clark said.

Clark’s ability to connect to the community and tell stories is what drew Art Galleries Director Dion Johnson to her work when he first saw it on exhibition at the Craft Art and Folk Museum in Los Angeles.

“What you see in the gallery is documentation of the project but I think the dynamic of her being a part of the community and her studio being a place to engage with these hair specialists (makes) this a studio that is atypical and a community experience,” Johnson said.

Students attending the event appreciated the atypical nature of the exhibit as it showcased a culture different than what most were used to.

“(The gallery) directed my intentions to new things and really opened up a different perspective for me as someone who has never been in contact with the braiding industry,” said Allyson Blanck, junior anthropology and art history major.

The exhibit will be available until April 27.