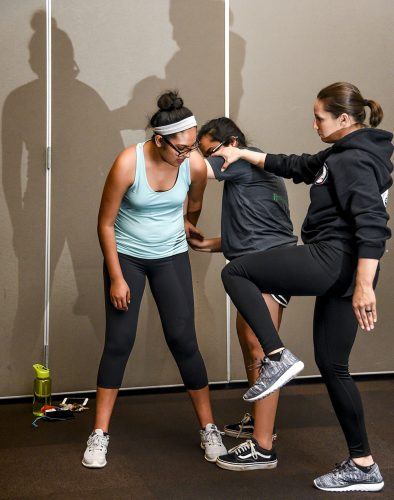 A women’s self defense class was taught inside the Campus Center ballroom on Monday by Aaron and Amanda Miller. The married couple owns and teaches at BloodSpiller, a Jiu-Jitsu gym in Yucaipa. The La Verne chapter of HerCampus, a nationally networked online publication for college woman co-sponsored the event to help women learn the basics of self defense. Agaly De Jesus, senior kinesiology major, and Cinthia Gutierrez, senior criminology major, practice escaping from being restrained while Amanda Miller demonstrated the next proper steps. / photo by Cortney Mace

A self defense event was held in the Campus Center Ballroom Monday to empower young women and educate them on the importance of defense awareness.

Miller said that self defense is important because the day and age we live in of social media, it’s cool to post videos of people getting beat up, simply for likes.

“I’ve seen it countless times where something is happening and instead of them helping somebody, they’re just out there with their phones,” Miller said.

Miller said that respect for women now is starkly different from when he was growing up, making it more important to be knowledgeable in self defense.

“I tell women all the time, you need to do something to protect yourself,” Miller said.

Jiu-Jitsu is about taking control of a situation and Miller believes it can help women have more self confidence when they are alone.

“I want to make you guys [women] feel like you are safe – like you can walk down a parking lot or walk down the street and you can feel comfortable,” Miller said.

The idea for the event came to Williams when she realized she would not know how to defend herself if she was ever in a bad situation.

“You never know what kind of situation you will be in and I think it is important for college students and other women to learn self defense,” Williams said.

Miller said Jiu-Jitsu is not just a sport or a way to defend yourself, but also a lifestyle and a way to overcome stress.

“Jiu-Jitsu just shows you that you’ll be able to resolve situations and how to overcome frustrations,” Miller said.

Kids and students are under a lot of stress nowadays and Miller said any sort of exercise can help relieve it.

“If you introduce some sort of physical activity to your process on a daily basis, you actually perform better throughout your day,” Miller said.

Santos has played multiple sports, but has stayed with Jiu-Jitsu for the past 10 years because of how it physically and mentally makes her feel.

“I had played sports my whole life and nothing compared to how the way I felt after I started doing martial arts,” Santos said.

Senior communications major Monica Jauregui came to the event to support Williams and learn more about defending herself.

“I wanted to know how I could be more comfortable being by myself in sketchy situations,” Jauregui said.

Throughout the event Jauregui learned two important moves to protecting herself and said they were pretty simple.

“I learned that self defense is a lot easier than I thought it would be,” Jauregui said.