By Cortney Mace, Jesica Kimberlin on September 8, 2017 in News 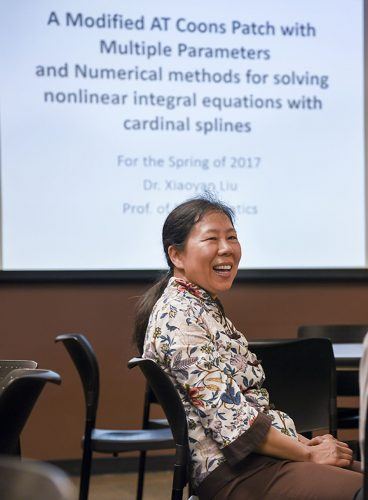 Xiaoyan Liu, professor of mathematics, has more than 30 publications of her research. This summer Liu traveled to London and China to speak on her recently published work, “A Modified AT Coons Patch with Multiple Parameters.” Liu explained how approximation theory can benefit companies during her lecture Tuesday in the President’s Dining Room. / photo by Cortney Mace

Students and faculty gathered at noon Tuesday in the President’s Dining Room as Xiaoyan Liu, professor of mathematics, spoke about her most recent publications on her research of approximation theory.

Over the summer Liu was invited to present her paper, “A Modified AT Coons Patch with Multiple Parameters,” in London at the 2017 International Conference of Applied and Engineering Mathematics.

Coons were originally named Coons Surface Method and it was presented in 1964 as a method of surface and curve design, Liu said.

All the Coons before Liu’s Coons were not able to modify the shape of constructed surface as well as Liu’s AT Coons Patch.

What makes Liu’s method more flexible is the fact that it was based on algebraic and trigonometric polynomials with two parameters for each direction instead of just one.

After being introduced to Liu’s Coons Patch during the lecture, Torres said that she was in shock when she learned that something that complicated could be applied to her field of study.

Liu was also invited to present her paper, “The Cardinal Spline Methods for The Numerical Solution of Nonlinear Integral Equations,” at the Eighth International Conference of Computational Methods which took place in China in July.

She explained that “spline” originally refers to thin splints used in building boats; boat builders would use thin splints of wood and pull them into places using weights that are also known as ducks or knots.

In mathematics, when a set of data points is used to determine an equation for a curve that would pass through each data point, both the curve and the steps made to solve the equation are called the spline.

“I was so surprised (to learn) she has at least 30 paper publications,” said Iraj Parchamazad, professor of chemistry.

Parchamazad said that in a lot of Liu’s published work, she is the first person to talk or suggest the ideas. He said that one of Liu’s publications has been cited 174 times over the last 10 years.

Kenneth Marcus, professor of history, said that it was fascinating to get more insight into that area of mathematics and to see how she brought historical context into her research.

“This is an area that can (be connected) to products and services made in this country and elsewhere,” Marcus said.