By Cortney Mace, Vanessa Martinez on October 6, 2017 in News 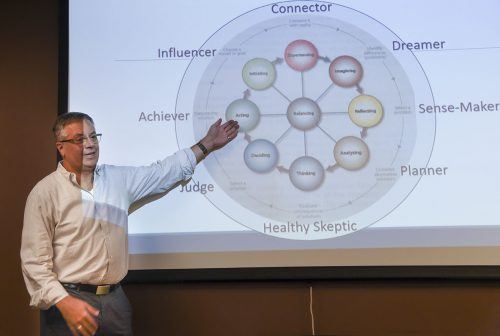 Rich Whitney, assistant professor of organizational leadership and an Eagle Scout, started the National Scouting Leadership Program to reform the way leadership is taught in the Boy Scouts of America. The Boy Scouts had taught leadership based on an outdated model. Whitney teamed up with David A. Kolb, founder of the Kolb Learning Cycle for Effective Leadership and Transformation, to create the nine basic foundations on how leadership should be taught./ photo by Cortney Mace

Assistant Professor of Organizational Leadership Rich Whitney talked about how the Boy Scouts’ leadership structure can be improved Tuesday in the President’s Dining Room.

During his lecture, “National Scouting Leadership Program Refresh” Whitney explained that he has been attending scouting leadership conferences to help develop leadership skills, which is a priority for the National Leadership program.

Whitney was a Boy Scout as a teenager in 1984, but he left scouting for more than 20 years because he disagreed with policies prohibiting gay members.

In 2015, the Boy Scouts reversed this discriminatory policy and he got involved again.

The NSL focuses on teenagers, ages 14 and 15, and most of the participants are Boy Scouts. The program’s goal is to teach leadership skills.

The group is also trying to tighten up national policy, so there is not a huge discrepancy from one regional program to the next.

“(Currently) there are a lot of regional ownerships in the program,” Whitney said. “So we know that different regions present the program in different ways, largely because of the way we have written it and how we present it, and how our syllabus works out there in other regions.”

“I went back to the original text of those programs,” Whitney said. “I then mapped all of those under project management steps and I changed them to program planning steps.”

He said he wanted the layout of the National Scouting Program to improve with personal leadership training and programming development.

“I liked the presentation because of my experience with Boy Scouts,” said David Bickford, associate professor of biology. “He reflected very honestly and transparently and how things are moving forward in the Boy Scouts community.”

Bickford added that being part of the Boy Scouts helped him grow and accomplish his goal of being a biology professor.

“I think a good leader is someone who is willing to listen to different ideas and receive criticism,” sophomore computer science major Tianna Cano said.

Cano added that a good leader is someone who does not have full control, but a balance.

“Leadership is being able to have someone being inspired to do a certain action for the benefit without being told to do it,” junior history major Jon Hall said.

Correction
An earlier version of the photo caption referred to Whitney as a “former Eagle Scout.” He is still an Eagle Scout. The Campus Times regrets the error.