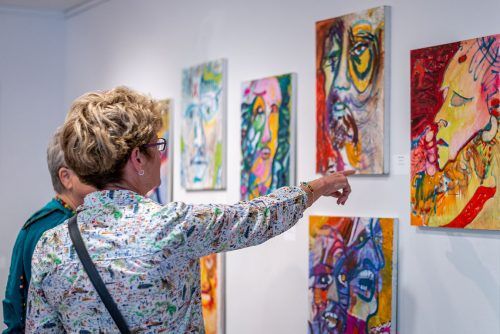 Lisa Phillips examines an art canvas at the Garner House’s Ginger Elliott Room in Claremont. “Supernova” opened Sunday with a reception, which gave people an opportunity to meet the artist Norma Tanega. / photo by Nikky Huynh

Tanega’s exhibition was composed of 36 works of paintings and mixed-media.

The Scripps College alumna’s bold and colorful art pieces hung on the white walls of Claremont Heritage’s Garner House. Her work spans over the last few decades, with pieces made in the 1970s to her newest piece in the collection that she created in 2010.

As well as geometric lines and shapes, her use of bold colors was a predominant theme in the exhibition.

Nine pieces from “Supernova” were named after prescription drugs, such as Xanax and Paxil. She called these pieces her “Medicine Heads.”

Her piece “Prozac,” also named after a drug, depicts a woman with piercing eyes and feather-like lashes.

“My favorite piece is ‘Scream Diptych’. I interpreted it as a cry of frustration.” Lozano said. “It’s very powerful.”

“I like the idea of using found objects and discarded items such as scrap metal, wood, and aluminum cans to create something new and unique,” Stanley added.

Tanega’s art, a contrast to her introverted personality, seems to be an outlet for her emotions, Shearer said.

Another prominent section of the exhibition were Tanega’s paintings of landscapes.

Her landscape paintings are strong, bold images and they seem to be mirroring planets like Earth and Mars, Shearer said.

“She doesn’t talk much about her work, so it’s difficult to find out what her inspirations are,” Shearer said. “She’s basically like, ‘I just paint.’”

Tanega said the lack of explanation gives the audience the opportunity to interpret her art. Shearer’s favorite art piece from the exhibition is Tanega’s self-portrait, as it gives one a sense of the artist’s personality,

The portrait does not necessarily look like Tanega, but it evokes a sense of the person’s soul, he said.

“You can kind of get lost in it without really having to analyze it,” Shearer said. “Her use of color and composition draws you in.”

Natalie Gutierrez can be reached at natalie.gutierrez2@laverne.edu.