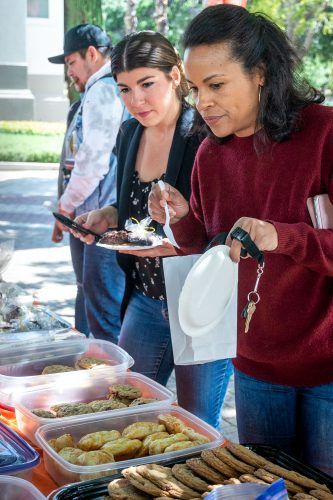 Lisa Lester, associate director for housing operations, and Susie Haynes, assignments coordinator for housing and residential life, consider their options at a bake sale Monday in the Johnson Family Plaza. All the money raised was for Andrew Tompkins, a former member of the swim and dive team, who after beating cancer in 2018, learned the cancer had returned. / photo by Nikky Huynh

The University of La Verne swim and dive team hosted a bake sale fundraiser for Andrew Tompkins, a former ULV diver who after he battled and defeated osteosarcoma cancer in 2018, learned recently that the cancer returned, this time as stage IV metastatic osteosarcoma.

Tompkins returned to La Verne this semester to continue studying business administration after he received 18 rounds of chemotherapy, three surgeries and physical therapy sessions to learn how to walk again.

The bake sale fundraiser, which was held Monday in the Johnson Family Plaza, raised almost $2,000.

Devin Ste. Marie, graduate assistant for swimming and diving, was moved to tears explaining the love the team has for Tompkins and the reason they decided to host this fundraiser.

“We are all so devastated that he is going through this again,” Ste. Marie said. “We wanted to help out as much as possible, and this was something we could all pitch in and help with.”

The team baked a decadent collection of sweets priced for $1, but Tompkins’ former diving coach said it was not entirely about raising money.

“We love him. He is positive and has gone through this really well,” said head swimming and diving coach Pat Skehan with tears in her eyes.

“Our goal was to raise money but also to provide engagement and awareness so he has lots of people in his corner when he needs it the most.”

Skehan said Tompkins was a talented diver and always a team player.

“Andrew went to NCAA Regionals his freshmen year which is very rare,” Skehan said. “He holds a varsity record and had a potential to go to Nationals. He was a hard worker and real pleasant to have on the team.”

Skehan wore a bracelet with the hashtag ‘Andrew Prayer Warriors,’ and said this fundraiser was a way for the team to channel their energy for Tompkins positively.

“Everyone was upset about (his relapse) so they needed something to focus their energy on,” Skehan said. “So they can be there for him when actuality they cannot physically be there because he is away receiving treatment.”

Roy Sorbel, senior biology major, bonded with Tompkins while on the swim and dive team.

“He is one of my best guy friends and he always has a great outlook on life,” Sorbel said. “I know this is such a big struggle for him but he is definitely coming around to fight this battle again.”

“I want to tell Andrew that you are not alone,” Sorbel said. “I know it is the second time around and your will can be broken, but I want to tell him to keep trying and fighting and that I love him.”

“Andrew is a great guy and has been an inspiration for all of us,” MacASkill said. “He has stayed positive through it all and has a positive outlook. Any donations are very helpful and will go to a good cause.”

Donations to help Tompkins and his family can be made on his GoFundMe page at gofundme.com/help-andrew-win-again-against-osteosarcoma.