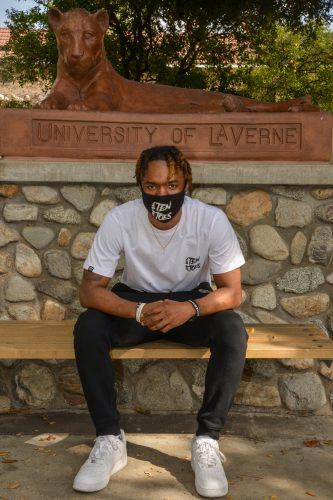 Denzel Stephens, junior psychology major and point guard for the men’s basketball team, has founded a clothing line called Ten Toes Apparel with his brother to give back to their hometown of Detroit, Michigan.

Stephens and his brother D’ante Brown, a graduate student in business administration at the University of La Verne, say they were inspired by the late Nipsey Hussle’s clothing business, The Marathon Clothing. Hussle built the company in his hometown of Crenshaw in South Los Angeles to create job opportunities for the people in his community and inspire them to believe they can do anything they set their minds to.

“After going back to Detroit for my cousin’s funeral in 2019, just seeing and remembering where I come from, seeing a lot of abandoned buildings and homeless people, and talking to old family members we haven’t seen in a while, really touched me and my brother,” Stephens said. “We were inspired to get the clothing business going to really give back to Detroit.”

Although Stephens’ basketball season was canceled this spring due to the ongoing pandemic, he and Brown dedicated long days and late nights to launching their Ten Toes Apparel clothing brand in December.

“It’s a lifestyle. It’s a mindset. When you’re Ten Toes you’re dedicated, you’re loyal, you persevere through struggle, you’re humble, care for your community whether you have lived there before or live there now,” Brown said.

With small businesses struggling to stay open throughout the pandemic, the brothers’ clothing company has gained local, international and celebrity support and has made $8,000 and counting since their official launch in late December.

“I didn’t just buy [his merch] because Denzel is my friend. Honestly, I bought it because I like the meaning behind Ten Toes and what he had to say before I decided to buy anything,” said Curtis McWright, Stephens’ best friend.

Stephens’ and Brown’s mother is a single parent who raised three kids on her own and moved her family from Detroit to Southern California to create better educational opportunities and a better life for her children.

She did everything from sending Stephens to private school, taking him to basketball practice and waiting for practice to be over to avoid him from ever having to take the bus, to keep her kids safe from violence within the communities they lived in around the Los Angeles area.

“She is really one of the real reasons why this brand is named Ten Toes because my mom is the definition of Ten Toes through everything she has done for us,” Stephens said.

Both brothers believe their brand showcases a part of who they are.

“Ten Toes is what mine and my brother’s values are built on. Support others, be humble, have perseverance, have integrity, all of the things a real person should embody. Giving back to your family and being there for your community, friends. That’s really how me and my brother are, our personalities, and who we are as people,” Stephens said.

“Ten Toes is about loyalty as well and Denzel displays that,” Brown said.

“Ten Toes” is also a relevant statement within the Black community and has been around hip-hop culture for many years. Brown said he wanted the name to represent his definition of what Ten Toes is truly about within his family and what he wanted their clothing brand to portray to the community.

Ten Toes Apparel is a pure image of their Detroit roots and over 10-year home in California.

Tyler Ridley, junior forward for the ULV men’s basketball team, also created his own clothing business during the pandemic and launched GDB (Grind. Determined. Blessed.) clothing this past November.

“I didn’t know beforehand that he was going to drop clothing and he didn’t know I was going to put out clothing. That’s why it’s kind of crazy that he’s doing his business and I’m doing mine. But we are doing it as the same team kind of thing,” Ridley said.

Ridley is also Stephens’ friend off of the basketball court and envisions the success their clothing brands will obtain in the near future.

“Don’t be surprised when y’all see mine and Denzel’s brands just boomin’ out of nowhere. He got it. His brand is hard for sure. When you see his, you will see mine too,” Ridley said.

The Stephens and Brown said they had no doubts about their clothing brand despite the year-long process of officially launching their brand.

“We have always had faith in us. We knew that it was hard from the start as soon as the full logo was designed. I knew it was really going to be good once I showed my teammates and they kept asking me every other day when it’s coming out,” Stephens said.

“Everyone was just so excited for us and we just got a lot of good feedback. That’s when I knew we could be very big,” Brown said.

McWright described Stephens as a warrior through the life challenges he has faced, and the determination he had to make the basketball team as a freshman despite the obstacles that were placed against him was admirable.

“I have seen him persevere through so many things and he’s just a walking example that anything can be done if you put your mind to it,” McWright said.

Isaiah Knox, junior guard on the basketball team and brand ambassador for Ten Toes Apparel, also said it’s in Stephens’ nature to have a dedicated mindset on and off the court. 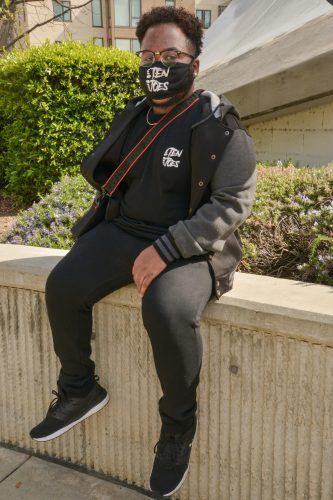 John Malone II, junior guard and brand ambassador for Ten Toes Apparel, said he sees the impact the brothers’ clothing company will have on the community.

Stephens and Brown are planning to release new clothing for Ten Toes Apparel through their upcoming spring collection and women’s line.

Brown is also planning on creating the Ten Toes Legacy Foundation to help students with their education by creating a scholarship fund, creating programs for single moms, after school programs, beach clean ups and other community events to give back to their community.

“We want you to stand on your two feet and be Ten Toes for your family, friends and your community,” Stephens said.