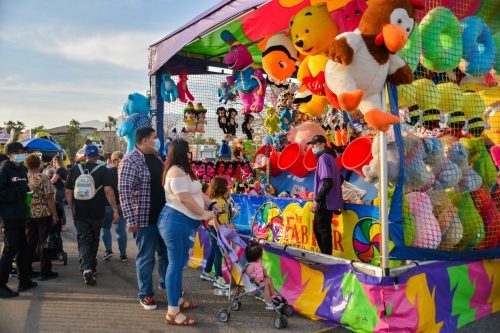 Families had a blast trying to win stuffed animals and toys for each other at carnival games such as The Fab Fair on Saturday at the Ontario Fair Foodie Fest at Toyota Arena. The fair runs every weekend through April 25. / photo by Emily Alvarez

As the world slowly phases out of the COVID-19 pandemic, some of the best things are becoming available to the public again, including Ontario’s Fair Foodie Fest at the Toyota Arena. I attended the first in-person fair in San Bernardino County in a year on Saturday, and the day was filled with thrills, delicious food and fun.

The food fair, tailored to meet many tastes, had nine different booths with signature fair favorites including funnel cake, fried Oreos, “freshly squeezed” but overwhelmingly sweet lemonade and barbecue items. The food’s pricing ranged from $5 to $20 depending on the item. While some items were more on the expensive side, the taste was worthwhile. More specifically, Juicy’s curly fries, cooked to perfection and shaped into a large beehive, were well worth the money and made me feel full for hours.

And as if it could not get any better than that, the fair managed to bring in a number of amusement attractions, including a Ferris wheel, which was even more fun to watch when its lights lit up the Toyota Arena at night.

As I entered the arena, I was surprised seeing the number of people who came out to the outdoor festival. Families crowded together in large groups, a somewhat alarming sight considering the predicted fourth wave expected to hit California. However, there was plenty of outdoor space to go off on your own and be distant from the crowds while simultaneously having a good time.

Fair officials, however, did not seem to be enforcing mask-wearing or social distancing guidelines. Lines for the carnival rides were rounding corners and tightly packed despite the floor markers placed for social distancing purposes. A number of families were also standing in these lines without the usual face covering we have become accustomed to. Luckily, I happened to be carrying six different hand sanitizers with me and a pack of peach-scented bacterial wipes to ease the anxiety.

Despite the public health care concerns, it is safe to say thrill-seekers were satisfied with the selection of carnival rides. One ride swung a group of 16 people about 100 feet in the air. Screams – the good ones, of course – could be heard from miles away and slowly attracted a larger crowd with intense curiosity regarding what the ride has to offer.

Adjacent to it was the fun house made for smaller children to enjoy. To enter, kids had to climb up a set of stairs, navigate through the house full of mirrors and lights, and eventually end with the purple swirly slide.

The most enjoyable ride was the sky swings. The seats were spaced far apart, luckily, and took you up in the air in a decently paced circle, and it was enough to see the entire arena and everything it had to offer. The best part was watching the sunset from high up in the air and seeing the lights from the food stands and rides glow brighter as the day got darker and ABBA’s “Dancing Queen” filled the speakers of the arena.

If you are looking to attend the fair, I would recommend bringing sanitizing products to use at the event, as the cleaning crew was scarce throughout the day.

Overall, the experience was memorable. If you are looking to attend Ontario’s Fair Foodie Fest tickets can be found here and are completely free. All the information for the fair, including menu items, entry times, and availability can be found on the website as well.

The in-person fair will be open Friday through Sunday at noon until April 25.