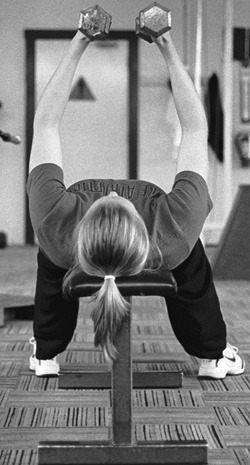 Sophomore Katie Zwissler works her arms in the Hanawalt Fitness Center. The Athletic Department in currently seeking funds to reconstruct and supply new equipment for the Center. / photo by Laura Ambriz

To satisfy the needs of the University of La Verne community, the Athletic Department is attempting to raise $50,000 to fund a proposed upgrade of the Hanawalt Fitness Center.

“I think that the facilities we currently have,” said Athletic Director Jim Paschal, “is not appropriate for our own student body at the present time.”

The Hanawalt Center houses several out-of-date machines that have been there since the center was dedicated to Dwight Hanawalt on May 24, 1986 and, according to Assistant football coach Mark Potocki, is tailored more toward athletes.

“We’re limited in what we can do,” said Paschal of the Hanawalt Center’s current state. “There’ll be a lot more things that one can work on out there.”

According to a press release from Paschal, the project was initiated in order to keep La Verne on pace with its competitors, and make it more attractive to potential student athletes and meet the needs of 20 intercollegiate teams, Movement and Sports Science classes, the general student body, faculty and staff.

“It is the largest need for our athletic department,” said University Relations Assistant Director of Planned Giving Don Flora, adding that ULV recently put in place a new track and new gym floor. “I think it’s one of the top four or five things that the student body … needs.”

Of the current Hanawalt Center, Flora said “It doesn’t encourage you to come in. The new stuff will be … really fresh. I think it’ll help and augment all of our off-season weight training for the athletic department.”

What began as a minor renovation has become an intensive, detailed project. The total estimated cost of the project is $46,000 and a total of approximately $15,000 has already been raised, with funds coming from ULV staff and the La Verne Athletic Associates (LVAA).

The purchase of new equipment, which will be provided by Execufit, makes up a majority of the estimated cost of the proposal, which calls for an addition of 1,100 square feet to the south side of the Hanawalt Center.

The new power-lifting room, which will be weather-proof, enclosed by fencing, windscreen and an aluminum corrugated roof, will be placed on the existing concrete foundation.

“I think it’s just a natural addition for us,” Paschal said, adding that the money required for the project was a “reasonable amount,” and that the project should be completed by Aug. 15.

“That would coincide with the new school year, rather than doing it in the middle of the year like the Spot, which hasn’t been completed yet,” he said.

Through the efforts of Flora and Alumni Relations Director Lura Poggi, University Relations has undertaken the task of organizing fund raising duties.

“It’s a pretty large effort,” Paschal said in regards to the collective efforts. “We’re contacting all athletes that we can find phone numbers and addresses for.”

University Relations representatives will contact former athletes, faculty, staff and LVAA through the mail for donations.

“It’s a great way to tell out past athletes that we’re making steps to meet the new millennium in the right way,” said Flora.