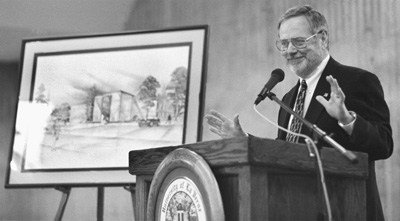 On Tuesday, a public community celebration was held at the new site of the University of La Verne College of Law at 320 E. D St. in Ontario. There were many speeches given during the reception by some of the key players of the new College of Law including, ULV President Stephen Morgan, Ontario Mayor Gary Ovitt and College of Law Dean Kenneth Held (above). Completion of the 60,000 square foot building is scheduled for January of 2001. / photo by Erica Paal

The city of Ontario officially welcomed the University of La Verne on Tuesday at a ceremony to begin remodeling the building which will soon house ULV’s College of Law.

The College, celebrating its 30th anniversary this year, is attempting to become the first American Bar Association [ABA]-approved law school in the San Gabriel Valley and Inland Empire, an action described by ULV President Stephen Morgan as “the most important action in the University’s 108-year history,” according to a press release.

The new location of the College of Law is 320 E. D St. The building is surrounded by City Hall, the police and fire departments and the public library.

Kenneth Held, the dean of the College of Law, said the new location was appropriate because all the things reflected in the law, and central to its understanding, are represented at the location.

“It’s fitting that Ontario and the Inland Empire have made it possible for a legal system reflecting these values to be taught at this particular spot,” he said.

The remodeling is scheduled to be completed and the building opened for classes in January 2001, housing three times that of the current ULV facility, the Hoover Building, according to a press release.

The new 60,000 square foot, two-story building will house eight modern classrooms and the largest law library in the San Gabriel Valley and Inland Empire. It will feature a new modern, fully-equipped courtroom.

Held said the college has officially notified the ABA of its intent to apply for ABA approval in the next academic year.

The College will move into the building in December, Dr. Morgan said, but the grand opening will be in February or March.

Dr. Morgan presented Ontario Mayor Gary Ovitt with a plaque “with appreciation of our partnership with the City of Ontario.”

Others honored for their contributions at the ceremony included Jim Long, the chair of the Board of Trustees at La Verne; Dick Landis, a trustee emeritus; Richard Lewis, a new member of the Board of Trustees who was represented by his son David, along with Ben and Barbara Harris, who have made a big contribution to the construction, which is under the direction of Kurt Rothweiler of KAR Construction.

Ovitt said the move was a sign of progress for both the City of Ontario and the University of La Verne. The new college, which Ovitt said will be a first-class facility, will be home to 200 students. That total is expected to easily double over time.