By Jason Cooper, Laura Ambriz on March 12, 1999 in Baseball, Sports 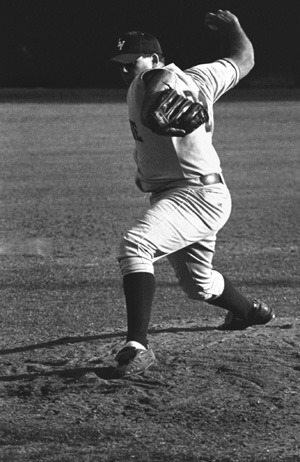 The boys of spring were in action last Friday, racking up runs and a victory.

Leopard baseball traveled to face off against the Poets of Whittier College, ending in a 12-3 victory for La Verne. Run support and some smoke from junior pitcher Ryan Christoph contributed to the win.

Christoph held the Poets to only three runs through nine innings.

“He was a key player,” said head coach Bobby Lee. “He was the defense that we needed.”

Offense is what carried the Leopards through the game. La Verne was up 5-0 in the fourth inning and did not look back.

Senior first baseman Russell Riehl, went 2-for-3 with a double and home run, helping the Leopards with five RBI.

Runs seemed to be a plentiful for the Leopards this weekend as play against Whittier moved back to La Verne on Saturday, where ULV took both games of a doubleheader.

“The guys are getting more at-bats,” said Lee. “We haven’t necessarily focused on our hitting but they are getting better.”

The Leopards’ lacking defense that has plagued them previously was not a major factor this weekend.

“We tried not to make an issue of that,” said Lee. “We practiced a little more and the guys are getting accustomed to each and are getting better.

“Our philosophy is that if we play good defense, good things will happen”

Although errors continued to plagued La Verne, good things continued to happen for the Leopards as they faced Moravian College on Sunday. The Leopards walked away with 9-8 decision in their favor.

Senior pitcher Richard Searing gave up seven runs through five innings. Freshman relief pitcher Derek King then came in to pick up the slack, pitching two strong inning in which he gave one hit and one run. Sophomore Robert Hernandez entered the game in the eighth, pitching two innings, receiving the win. The Leopards came up with a run in the ninth, ending the game in a La Verne victory.

Wednesday, ULV played Montclair State from New Jersey, which resulted in a 10-4 win.

“They are one of best teams in the nation.” said Lee. “We just went out there and played our game.”

The Leopards and their game will be in action this weekend as they play in the California Classic tournament at home and other various sites. Games will take place Saturday and Sunday.