By Brice Nixon, Jen Newman on October 6, 2000 in Football, Sports 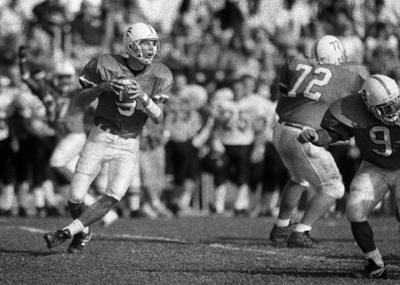 Saturday’s football game ended a 10-year winning streak of the Leopards over the Occidental Tigers when Occidental won 21-10. The last time the Tigers defeated La Verne was in 1990 with a score of 38-27. Quarterback Jeremy Mears (#6) gets protected by Shaun Hannan (#72) and James Torrance (#9). The Leopards face Pomona-Pitzer in a nonconference game today. / photo by Jen Newman

by Brice Nixon
Editor in Chief

“It’s an embarrassment,” said Morel. “In fact, this is the biggest embarrassment since I’ve been at La Verne. Since 1991 we’ve never had a loss like this, where we just stunk.”

Clutching a three-point lead midway through the fourth quarter, ULV’s offensive struggles came back to bite it as the Tigers scored two touchdowns to shock the favored Leopards, who lost for the second time in three games.

La Verne led 10-7 when junior Mario Franklin fumbled a punt return and the Tigers recovered at the Leopards 27 with just under nine minutes remaining. Occidental quarterback Jesus Zuniga hit wideout Rhone Rarick with a 25-yard pass to give the Tigers possession at the 1. Running back Kamron Jones then ran it in to give Occidental the lead, 14-10.

La Verne was forced to punt on its next possession, and punter Randy McGillivry pinned the Tigers at their 10-yard line. But his effort was wasted when Occidental running back Derrel Furutani broke free for 44 yards. After Zuniga found Mario Thompson for a 35-yard pass, Occidental had first down at the Leopards 18. Furutani ran it in for a 21-10 Occidental lead with 4:40 to play, leaving the Leopards with little chance.

La Verne junior quarterback Jeremy Mears was intercepted on La Verne’s next possession, effectively eliminating any chance of a comeback. But the Leopards’ defense gave them one more shot when they forced Occidental’s offense to punt.

La Verne took over at their own 10 with 2:04 left in the game. An intentional grounding penalty left the Leopards at their own 1 and two incompletions followed. Occidental took over and ran out the clock.

Morel was not inclined to give the Tigers all the credit, instead pointing his team’s shortcomings.

“It had nothing to do with Occidental at all,” he said. “It just had to do with us. We were not ready to play. We didn’t execute. If anybody could have made one play today we would’ve won the game. And we didn’t. We just stunk. From beginning to end we stunk, and it’s embarrassing.

“I don’t think we can ever have a loss this bad again, in terms of playing a team that we’re better [than]. We were better than Occidental and they beat us.”

La Verne totaled only 97 yards of offense. Mears and junior Aaron Becker both attempted 15 passes. Mears was 3-of-15 for 3 yards with two interceptions. Becker’s numbers were only slightly better. He was 8-of-15 for 62 yards and one touchdown. Morel said the coaching staff would look at the game tape and “start to make a determination” on who will be quarterback.

“We knew they wanted to throw the ball, and we were looking to defend the pass all game,” said Occidental head coach Dave Widolff.

“If the receivers don’t run the right routes, and the running backs don’t run hard, and we bust assignments on defense, and we are bad on special teams, you’re going to lose,” said Morel. “And we did it all today. So that is the anatomy of an upset loss.”

La Verne’s defense turned in a solid effort, led by junior linebacker Ryan Gustafson. His game-high 10 tackles, including five for a loss, helped the Leopards hold Occidental to 64 yards rushing and only seven points through three and a half quarters. Zuniga completed 16 of 31 passes for 205 yards and was sacked three times.

“I just hope this loss doesn’t tear up the team,” said junior fullback Falone Serna. “I am embarrassed. I think the whole team is, but I hope it will make us stronger and we can bounce back. We have the potential to go [7-2]. We’re way better than Oxy. We just played flat today and made mistakes that gave it to them.”

“It’ll be interesting to see how do we rebound,” said Morel. “That’ll be the real test. We’ve got three really tough teams in a row, and if we play like today, we’ll lose every week 72-0.”

Morel said Becker will be the starting quarterback tomorrow.

“We’re facing a very good Pomona football team tomorrow,” said Morel. “We have to show up to the game. We found out we’re not good enough to overlook anybody.

“We need to come out excited to play football. Pomona is one of the better teams we’re going to face. In the last four years they’ve lost four games. We were the only team to beat them last year.”