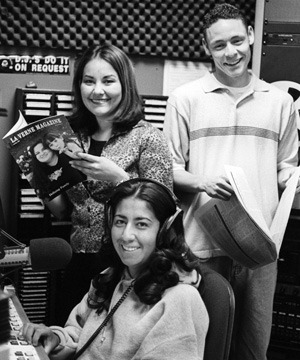 The Communications Department announced the new student leadership positions for the Fall 2000 semester. Junior Michelle Bocanegra will be the new Program Director for KULV, sophomore Alisha Rosas will serve as editor in chief of La Verne Magazine and sophomore Brice Nixon will be editor in chief for the Campus Times. / photo by Erica Paal

Experience and dedication will take over the Communication Department’s journalism and broadcasting programs next semester.

Sophomore Brice Nixon will be the editor in chief of the Campus Times and sophomore Alisha Rosas was selected as editor in chief for La Verne Magazine, while junior Michelle Bocanegra will take charge as the program director for 107.9 KULV.

Nixon, a journalism major, was offered the position after three semesters on the newspaper staff.

He was the sports editor during the 1999 Fall semester and is editorial director for the staff.

“I’m really looking forward to it because I think it’s going to be a great opportunity for myself to use everything I’ve learned and try to help others get better,” said Nixon.

Nixon’s work earned him awards at both the annual Communications Department banquet and the California Intercollegiate Press Association (CIPA) convention.

“I have all the confidence in Brice. He has a track record of leadership and I look forward to an exciting semester with him at the helm,” said Eric Bishop, Campus Times adviser. “He brings a lot to the EIC position.”

At the same time, Nixon is working as a correspondent for the San Gabriel Valley Tribune.

“During the winter I started working at the San Gabriel Valley Tribune. I’ve been doing a lot of high school game coverage,” Nixon said. “This summer they’re going to train me as a rimmer.”

He also said he is taking this new challenge with optimism.

In the meantime, Rosas, managing editor of the Campus Times, is also getting ready to take over the position as editor for the La Verne Magazine.

Although she has never worked for the magazine, Rosas is ready to make the best out of the opportunity.

“It’s a bit intimidating, but I think everything I’ve learned from being on the newspaper is going to help me,” she said. “We’ll put out a good issue.”

Like Nixon, Rosas is a third-semester member of the Campus Times. She was arts & entertainment editor last semester.

She was offered the position for the magazine through Bishop since Dr. George Keeler, professor of journalism and adviser to the magazine, is on sabbatical this semester.

“I collaborated with George on selecting the magazine editor and he was clear that Alisha was his No. 1 choice,” said Bishop. “From my experiences with her on Campus Times, I know she’ll be an excellent leader.”

“I’ve worked with George in the past and we work well together,” said Rosas.

She said her goal is to keep the award-winning reputation the magazine has had over the past few years.

Rosas, a journalism major, will also remain on the Campus Times staff next semester and she expects to hold a position on the editorial board.

“Much of my heart belongs to the newspaper,” said Rosas.

Rosas’ work has been recognized as she was awarded the 1999 Joel Garcia Scholarship, along with the Hollywood Women’s Press Club Association writing scholarship.

Her newswriting skills were also confirmed by a panel of professionals as she took first and second places for news story at last year’s banquet.

“That’s the type of recognition that lets you know you’re doing well,” Rosas said. “That’s what keeps me going.

“I may not be the best writer, but I’m more than willing to give 110 percent all the time,” she said.

She said it is her determination that pushes her to make it through the obstacles she faces.

“I’m very fortunate that I know what I want to do with my life,” said Rosas. “If I can give others the opportunity to find that same closure in doing what they love, then I have succeeded.”

KULV will be directed by Bocanegra, a radio broadcasting major, for next year.

Bocanegra is the current music director and she worked well enough to be promoted for the station’s top position as program director.

“She is very productive, efficient and a hard worker,” said Shane Rodrigues, radio and TV assistant.

“She shows a lot of professionalism for the radio station and has the drive and the love to succeed and make the station successful,” he said.

Bocanegra will work toward increasing the station’s ratings.

“It’s going to help prepare me for when I go out to get a job because the way we run things here at the station is pretty much how it is in a real station,” said Bocanegra.

Among the changes she has in mind for the upcoming year are the probable format change and more sports coverage.

“I think changing the format is something that I might want to try, but I think this format also works well,” said she.

The station runs an alternative rock format, but Bocanegra would like to explore working with a Top 40 format.

“I think sports is something that I would like to have more of on KULV,” said Bocanegra. “This year we didn’t have a lot of baseball games.

“I’d like to get some recognition to some other sport, other than football.

“I think my main priority would be to get more people to listen because we don’t have that many listeners now.