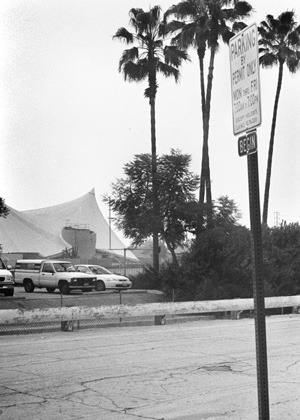 Parking on B Street between Bonita Avenue and First Street is restricted to non-residents Monday through Friday. Due to new parking complications and frustrations, residents of B Street requested that a permit system be enforced to eliminate the problem of non-residents taking their parking. / photo by Erica Paal

Due to numerous resident complaints, the La Verne City Council approved the designation of about 15 parking spaces along B Street as “preferential parking” areas.

The decision, put into effect a week after the Jan. 4 council meeting, reduced the amount of parking spaces usually occupied by University of La Verne students and staff.

Only La Verne residents who received the crimson-colored parking permits issued by the city will be allowed to park along the designated areas. These include residential properties between First Street and Bonita Avenue.

Violators who park in preferential parking areas during 7 a.m. and 7 p.m. on weekdays are fined $30 per offense. The permit system is in effect during this period, excluding holidays.

The remaining spots — about nine total — along B Street may be used by the public without a permit. These include those spaces aside the International House and the two spaces parallel to ULV’s B Street parking lot, both of which are the University’s property.

“We’re talking about the parking on the University as a whole,” said John Lentz, director of Campus Safety and Transportation at the University, of the issue. “The city set a precedent by restricting parking on the north side of Bonita Avenue, and now they’ve carried that on to B Street.”

Lentz recognized that parking on ULV’s five-block central campus is an issue, and that, with a growing population, the matter is becoming more of a problem. “In these times, losing one spot is important,” he said.

But residents like Geri Silveira feel the same about their own privacy. “We are plagued by students who park here,” she said. “But the students are not the problem. The University is the one we are upset with.”

In the 18 years she and her husband have resided at their B Street home, Silveira said the parking issue has always been a concern.

But she said it was more than a matter of students occasionally blocking driveways and loitering on their property. In some instances, students would leave trash and/or cigarette butts on front lawns. Therefore, in 1995, Silveira and her neighbors took action and addressed the University with several letters.

“All of that to absolutely no avail,” Silveira said. “The only way to deal with the problem was to petition to the city council to make the areas preferential parking spots.”

Therefore, she led a petition for all B Street residents, and, along with several neighbors, presented the petition and voiced their frustrations at the January city council meeting.

Philip Hawkey, executive vice president, received knowledge of B Street residents’ intentions the week prior to the meeting.

“I wish there had been an opportunity to have a discussion with the neighbors — not only with parking, but with the relationship about being an adjacent neighbor to the University,” Hawkey said. “I have no serious objection about the neighborhood wanting to deal with their privacy.”

Hawkey said part of the solution to losing parking spaces along B Street will come with the new parking lot at the University’s new education building, the Barkley Building. Completion of its construction is anticipated by the end of March, allowing for an estimated 60 additional parking spaces.

In addition, the University’s new bookstore, which is scheduled for completion later this year, will also provide parking spaces at its Bonita Avenue and D Street lot.

Other alternatives to parking solutions include implementing a permit system throughout the campus, including in the residence hall parking lots, and changing the current parallel parking spaces to a diagonal pattern, said Lentz. Further into the future is also the possible construction of a parking structure, which Hawkey said will cost the University $3-4 million.

This idea, however, may not be taken into active consideration until “other developments” are in the works, added Hawkey. “We don’t have the resources to build a $4 million parking garage,” he said.

In any case, all ideas proposed by the University must first be approved by the city council. For the time being, both Hawkey and Lentz suggest that both students and staff seek alternatives for parking.

“We encourage students not to drive to class [from the Oaks Residence Hall],” said Lentz. “Commuters should be more alert to where they are parking and respect the rights of residents.”

“The problem has a positive side as well,” added Hawkey. “It reflects an increased demand for the programs the University has to offer.

“That’s the good side — that people want to come here.”