By Enrique Gutiérrez, Ian Gratz on May 14, 1999 in Baseball, Sports 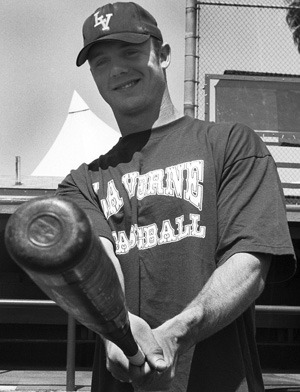 “He came. He saw. He conquered.” Although it’s a cliché, it fits senior Russell Riehl perfectly.

“Throughout the season, more than any other time, I’m pretty modest about all that. I don’t like to talk about stats, I don’t like to know my stats. That is something that if I worry about, will make me play worse,” he said.

But it is not easy to ignore them when he receives the triple crown for the most RBI, more home runs and the highest batting average.

“It was a great way to end my last collegiate season. I could not have asked for a better way to have finished my last season,” said Riehl, a biology/pre-med major.

“He decided that athletics and academics shouldn’t go together. He just tried to cut most of the athletics from the school,” Riehl said.

“When we found out we were cut, everybody was scrambling, finding a place we can play,” he said.

Although he had the opportunity to play at other Division I schools, he knew that going into a different school as a senior would make it harder for him to earn a spot on the starting line-up.

“I wanted to transfer to a place where I could be able to play my senior year and not waste my last year sitting on the bench,” Riehl said.

Hal DeVerry, an assistant coach at PSU, introduced Riehl to coach Bobby Lee, who was recently hired at ULV.

DeVerry and Lee were roommates during their college years.

“I expected him to be an impact player, but I did never predict he’d have 71 RBI or be the conference player of the year,” Lee said.

“I didn’t know anything about the school, I never came down to see the school before I decided to come here,” Riehl said. “It was like ‘OK, I’m going to La Verne, but I don’t know where that is.’ I came down here knowing absolutely nobody.”

Riehl was hesitant when he first came to ULV.

“Everyone knew I came from a D-I school,” he said. “I thought they’d think of me as trying to be better than them, which is not really the way it is or was or should be.”

“I met him for the first time in the weight room. I knew from that day he wasn’t a cocky kind of guy, he was real humble, down to earth and you could talk to him about baseball and everything,” said junior teammate Garren Injijian.

At ULV, Riehl set high standards not only for his fellow teammates, but for the whole community.

“His work ethics were unbelievably good. Very detailed, speak softly but carry a big stick kind of person,” said Lee. “He never said much. He was not a huge cheer leader. He led by example.

“I see him as a role model. My goals for next year are to duplicate everything he did this year, to put up the numbers he did. I want to follow in his footsteps,” he said.

“[We are] going to miss the type of person he is. He is upbeat, puts school first, he is a great student,” Lee said.

The fact that he gave up an opportunity to play for the Oakland A’s is proof of that.

“I had a chance to sign last summer and I turned it down,” Riehl said. “I didn’t get drafted, but I was a free-agent signee after the draft was over.”

He let that golden opportunity go not because he did not want to play professional ball, he did it because he had other priorities.

“I knew if I came down here, I was going to finish my education almost fully, I was going to get a chance to play my last collegiate year in the sun, which is something I hadn’t done before,” Riehl said.

Riehl was born in Ritzville, “a very small town” in Washington and began playing baseball when he was in first grade. When he was seven, he moved to Olympia.

He won the batting title as a junior with an average of .501. But it was not until his high school senior year that he started playing first base. He played both third base and pitcher prior to that.

Now that he has finished his collegiate career, he plans on taking another chance at playing on the next level.

“I have a tryout with the [Montreal] Expos on the 22nd at Chaffey College. Hopefully, if all goes well, I’m gonna be able to get pulled on the draft. If that chance happens I’m gonna take it, I’m gonna sign it,” he said.

Although he would like to play professional ball, Riehl is aware of the odds of making it.

“I’m not banking on it [being drafted], I know that I have my education to back me up.”

“He’s got the size. He’s got the talent. He’s got the fielding ability,” Injijian said. “If he makes the adjustment of batting with a wooden bat instead of an aluminum bat, he’ll have no problem.”

Riehl will go back to PSU to finish up his education.

“You can’t replace the kind of person he is,” he said.

“I hope 10 years down the road I’m still going to keep in touch with Russ and know what he’s doing and how he’s doing,” he said. “I’d love to have him come back every year in January and play our alumni game.”

As for Riehl, he has memories to last him a lifetime.

“The friends I made here, and my last at-bat, I will always remember,” he said.

His last at-bat came against Chapman at Ben Hines Field. He was 0-3 for the day when he stepped up to the plate in the eighth inning. With the count 1-2, Riehl hit a grand slam to end his career.

“Honestly, I had a weird feeling right before the pitch that I hit it. I just knew that he [the pitcher] was going to throw the pitch he threw,” he said. “When I hit it I was just praying to God the guy didn’t catch it.”

What happened on that last at-bat proves that “good things happen to good people,” Lee said.