By Enrique Gutiérrez, Natalie Fowle on April 14, 2000 in Sports, Tennis 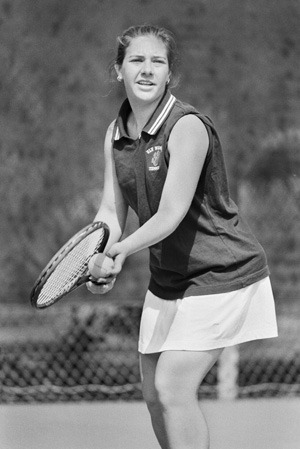 Tiffany Miller, a sophomore, prepares to serve against Occidental in a doubles match at La Verne last Friday. Miller, who joined the team half way through this season, and doubles partner Christan Krusic, a freshman, lost the match 8-0. / photo by Natalie Fowle

Forced to forfeit three matches due to a shortage of players, the University of La Verne women’s tennis team will face the conference championships this weekend with a huge mountain to climb.

Head coach Steve Bergovoy will go with four players to the Southern California Intercollegiate Athletic Conference (SCIAC) championship and the picture does not look promising for the Leopards.

The Leopards automatically forfeited two singles matches and one doubles.

“That really puts us in a hole,” Bergovoy said.

The team holds an overall 0-16 record, and will play the top-seeded team today.

“It’s been a tough learning process,” said Bergovoy of the season.

“Our team has gone through a lot. No one really knows behind the scenes what happened,” Krusic said. “Different players leaving, next year will definitely be a better season.”

Sophomore Tiffany Miller and freshman Anne Earnest will not participate because they have commitments elsewhere.

The team comes off of two recent losses against Occidental and Caltech.

Last Friday La Verne lost to visiting Occidental, 8-1. The only ULV player who walked out victorious was Miller.

“She played the best match of her career,” said Bergovoy.

The four players who will see action this weekend won nine games combined in their singles matches against Occidental.

The next day, ULV traveled to Caltech where the Beavers swept the Leopards, 9-0. Gifford, Krusic and Armenta ended with identical scores, all losing 6-0, 6-0. Hofer battled to a 6-2, 6-1 loss.

Miller was the only Leopard who forced a third set before being defeated. She won the opening set 6-3, but lost back-to-back sets 6-0, 6-1.

However, Bergovoy saw potential in one of the doubles matches.

The couple formed by Gifford and Krusic lost 8-4 but according to Bergovoy they, “showed the best team chemistry. They complement each other.”

Bergovoy anticipates that they will play together in the SCIAC tournament.

Armenta will move up to the No. 4 position for the first time this season.

The players realize the complications that come with rebuilding a team.

“It takes a couple of years to build a team,” said Hofer, the only returning player from last year. “We haven’t had the coach who actually puts the time and effort and with Steve I see that he is going to stick around.”

She also compared last year’s team with this season’s squad.

Nonetheless, the players and their coach agree that the year has been a good experience.

“Our team is like a little sorority,” said Bergovoy. “The trips going and coming back are fun.”

The players are willing to work hard to improve and accomplish their goals.

“Steve’s goal is that by the time I’m a senior he wants us to be nationally ranked,” said Krusic.