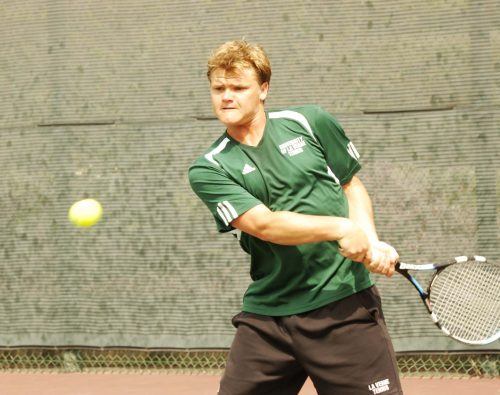 The Pomona-Pitzer Sagehens pecked the La Verne Leopards 8-1, Saturday at the Claremont College tennis courts. La Verne junior Richard Delgado returns with a backhand in a rally with doubles teammate Evan Mobley. The Leopards will go on to play Occidental tomorrow and in the SCIAC Championships on April 18-19 in Claremont. / photo by Leah Heagy

The Leopards were again unsuccessful in gaining their seventh win of the season and fell in nine sets to the Concordia Eagles, 9-0.

The Eagles, the No. 6 ranked team in the NAIA, came into the match against the Leopards with a record of 13-5 and 4-3 in their conference.

They feature some of the best international players in the world hailing from England, Brazil, France and Zimbawe.

“They were really consistent,” junior Adrian Laygo said. “As a team, they were strong from their No. 1 to their No. 6 player.”

As for the Leopards, their No. 1 doubles team of John Paul Arreglado and Alex Muresan had some chances in their match against Tim Kpulun and Bryan Newell.

However, Arreglado and Muresan were not able to hit crucial points at the right time and fell 8-5 in their match.

“The No. 1 doubles team had a chance,” head coach Don Flora said.

“They played at a very high level,” Flora said.

Other doubles teams composed of seniors Joe Manfre and Evan Mobley dropped their No. 3 match against Augusto Elias and Olivier Fabre, 8-2, while Laygo and junior Richard Delgado lost in their match to Chris Nguyen and Thomas Yancey, 8-0.

In singles matches, ULV did not have much more luck.

All six singles players dropped their two sets against Concordia players with Muresan having the strongest showing in his second set against Fabre.

Muresan made it close but ultimately was not able to force the match into a third set, losing 6-1, 7-6.

Despite another losing effort, the Leopards were without their best player, senior Mario Backus, who was forced to miss the match against Concordia because of a class conflict.

“We played a premier team today and not having our No. 1 player definitely hindered our chances to win,” Mobley said.

With this loss, ULV drops to 6-11 overall in the season including a 2-4 record in the Southern California Intercollegiate Athletic Conference.

The team is still counting this year as a successful season even with the recent struggles in getting victories.

“Every team we have played, we have made it tough for them unlike last year, we didn’t roll over,” Mobley said. “It’s a foreshadow to the future when La Verne will be one of the top dogs in the conference.”

“It’s hard to change the culture of this program in one year,” Flora said. “But the team has done a good job of doing their best so far.”

As the season winds down, the Leopards will go on the road to Eagle Rock for their final conference match of the season against Occidental at 2 p.m. on Saturday.

After the Tigers, the Leopards will be seeded according to their final record and participate in the SCIAC championships to be held April 18-19 in Claremont.

Softball swept by Pomona-Pitzer
Water polo struggles to get wins