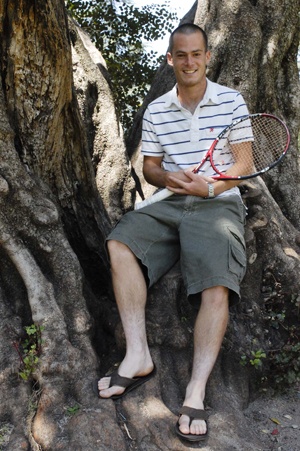 University of La Verne student Mario Backes was first taught to play tennis at age four by his father and began playing at tennis clubs in Switzerland by the age of 7. Now pursuing a masters in business at the University, Backes has played on the Leopards’ team since 2005. / photo by Leah Heagy

Few college athletes can brag that they once shared the court with an eventual professional superstar.

However Mario Backes can claim he has done just that and more throughout his tennis career.

Backes, a senior who hails from Basel, Switzerland, grew up near the same city and played in the same tennis academy as renowned player Roger Federer.

Still despite the countless comparisons to Federer, Backes, 25, has been able to make a name for himself ever since coming to the University of La Verne in February 2005.

Beginning his undergraduate days at the ULV Athens campus in Greece, Backes was forced to continue his education at the main campus in the United States after the closure of the school.

Although, Backes said he was excited to have the opportunity to play tennis again following a hiatus due to his studies and mandatory military service back home.

“I was excited to be going to the United States because I knew I could play on the tennis team,” Backes said.

“I’ve played tennis all my life ever since I was three years old.”

Since day one Backes has been a proven player on the court.

Yet his Achilles’ heel has often been his character which led to run-ins last season with former ULV men’s head tennis coach Steve Bergovoy.

Undoubtedly the team’s best player, Bergovoy dismissed Backes from the team because of attitude problems.

Nonetheless, Backes has always carried himself with a strong, unwilling personality if convinced he’s right.

He is also the first to admit that has been a good and bad thing for him throughout his life.

“I always stand up for myself. When I am set on my opinion, it is very hard to get me out of it,” Backes said.

“It’s both positive and negative in my character so I do know I can be stubborn sometimes. But, that’s a good thing as far as achieving goals I have set for myself.”

Backes once again like Federer have shown to be emotional and intense on the court which are both strengths and weaknesses in their games.

Yet Backes was able to harness his demeanor and have his most successful season as a Leopard under new head coach Don Flora this past season.

On April 20 Backes was the only player from ULV to be named to the Southern Cali­fornia Intercollegiate Athletic Conference second team.

The SCIAC, which is known as one of the most of competition in Division III tennis, certainly distinguishes Backes among some of the best domestic and foreign players around.

“To make the all-conference team just talks about the hard work he has put in this season,” Flora said. “It was a pleasure to see him enjoy a full collegiate tennis season.”

“It was a very nice honor,” Backes said.

As one of the co-captains of the team this year, Backes helped a relatively young squad to a 7-14 record including three wins in conference.

However the wins and losses do not account to the type of impact Backes has had on the team and the program.

“He basically stuck it out, became a captain and one of the best players on our team,” senior co-captain Evan Mobley said.

“When he would talk to people, they would listen because he’s earned their respect. He’s a quality person.”

“His true love of playing rubbed off on the other guys,” Flora said.

“He led by example and he wanted to be part of the change in La Verne tennis.”

As for tennis, Backes has officially ended his college career as his eligibility has ended but not before he competed in the Ojai tournament held on April 25.

After winning his first round match, Backes took the next match to the limit but eventually fell to the runner-up of the tourney.

Now Backes hopes to stay active in Southern California by continuing to engage in sports, which was the reason he first got involved with tennis, unlike his native counterpart, Federer.

“For him it was more like a career,” Backes said.

“For me, it was more like blowing off steam because I was a bundle of energy as a kid.”