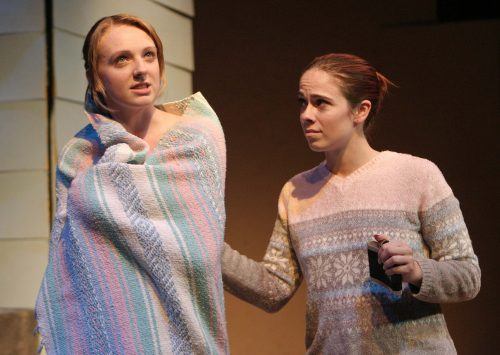 “An Evening with William Inge” was featured Monday and Tuesday night by the Theatre Directing class in the Jane Dibbell Cabaret Theatre. Miss Viola and Alice, performed by Jessica Swapp and Hannah Knous, appeared in “Memory of Summer,” directed by student Kris Bicknell. / photo by Rhiannon Mim

The festival was a series of one act performances written by William Inge, a modern American playwright. ULV students directed the show.

Everything got off to a great start with a dramatic performance by Jen Scarr, a freshman theater major.

Scarr had the audience laughing and feeling sorry for her character, Rosemary, as she pleaded for the character Howard to marry her.

Scarr said she got to do these one act performances last semester and enjoys working on them.

As the first performance ended, the audience eagerly awaited what was to come next. It wasn’t long before the next director hit the stage and introduced “Summer Brave.”

James McGrath, a senior at Bonita High School gave a dramatic and convincing performance in this scene.

McGrath, who got the part through open auditions a few weeks ago, enjoyed working in the festival.

“Doing theater at a high school is different because the director doesn’t work with you personally like they do in college,” McGrath said.

McGrath enjoyed the opportunity to have one-on-one rehearsals with his director Hailey Heisick, a junior theater and acting major.

Heisick was one of the few ULV students who acted and directed in the festival. Heisick, who acted alongside McGrath in “Summer Brave,” gave a riveting performance as a girl longing to be with the man she loved.

“It was fast and furious,” Heisick said. “Everybody really had to throw their heart into it.”

The students and actors were only given three weeks to cast and rehearse.

Emily Clark, a graduate student working on her master’s in education at ULV, said that the casting was three weeks ago and the rehearsals immediately began the next day.

Clark, who majored in theater performance in New York, was one of the highlights of the festival.

She stole the show with her quick wit and niche for comedy. Clark acted in two different scenes for the festival and both performances had the audience howling with laughter.

It was a big night for all the students and actors. For some, it was a night of debuts.

Gretchen Cooper, a philosophy major and theater minor, made her directorial debut at the Theater Mini-Festival.

“It’s the first thing I’ve ever directed,” Cooper said. “It was challenging working with actors and learning how to push them to express certain emotions. I think it turned out good.”

Audience members agreed with Cooper. Many of the night’s performances had the audience cheering out loud with laughter.

“I didn’t know what to expect,” Rachel Ortiz, a junior sociology major, said. “I was pleased with the performances and the directing.”

All of the performances were full of energy and enthusiasm.

The bond the directors and actors have formed was obvious when the festival ended and they gathered together to laugh and talk after the show.

Their hard work and dedication certainly paid off through all the practices and pre-production prior to their performance.