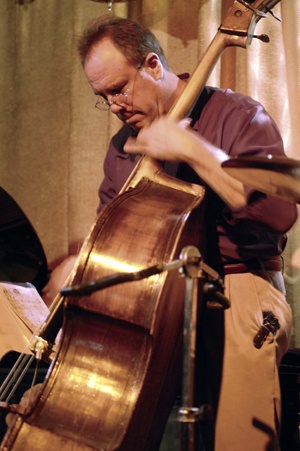 Bass player Chris Ferrin performs at the Hip Kitty Jazz and Fondue Club in Claremont on March 20, along with Nina Beck on piano, Andy Cowan on vocals and Scott Ikes on the drums. They will return to perform at the Hip Kitty on April 1. / photo by Leah Heagy

Andy Cowan and the Nina Beck Trio entertained the crowd at the Hip Kitty Jazz and Fondue Club in Claremont on March 20.

The diners enjoyed the soothing sounds of the jazz band over drinks and fondue, which kept the audience in good spirits.

This was another successful night for the Hip Kitty as Cowan and the Nina Beck Trio gave a great jazz performance.

“I think they are really good,” Chris Needham said. “I think he sounded a lot like Frank Sinatra.”

Cowan’s smooth voice and great vibe kept the crowd entertained and relaxed as they enjoyed their meals.

The night brought out a full moon and between songs Cowan was in good spirits as he continued to make references to the moon.

The new restaurant is known for their nightly jazz music and great fondue, bringing competition to other popular fondue restaurants.

The Hip Kitty takes a different and more exciting approach.

Every night a different band performs, keeping the location busy and full of positive energy.

The band played well together and made a great debut. However, not everyone was making their Hip Kitty debut that night.

Beck, the pianist, is a familiar face around the café.

Nancy Tessier, owner of the Hip Kitty, said that Beck plays there every Tuesday for piano night.

“It is usually just one person playing,” Tessier said. “She is good.”

Beck is so good in fact that Tessier said she takes requests from the crowd and can play almost anything.

Cowan, originally from Philadelphia but who now resides in Santa Monica, has been singing at jazz clubs for about 20 years.

However, Cowan is not just a jazz singer. He is also a writer who was affected during the writer’s strike.

Cowan has written for popular sitcoms, like “Seinfeld,” and just got finished writing an article on Barack Obama.

He also has made appearances on some older popular television shows.

“I sang on ‘The Merv Griffin Show,’” Cowan said.

Cowan spoke about a performance he once did in which he was asked to sing songs that he thought Sinatra would have sung if he were to be a star during a different musical era.

The comparisons of Cowan to Sinatra have been carried throughout the years giving Cowan a priceless compliment to his performances.

Yet, Cowan does more than deliver a great sound. He also writes and arranges his own music.

While Cowan has made many great lifetime accomplishments, he still comes back to the jazz clubs.

This was his first time playing at the Hip Kitty but he had heard good things about it from his friend, Beck. And Cowan had a great time performing there.

“This is a great place.” Cowan said. “It’s very reciprocal. They give you energy and you give them energy back.”

The Hip Kitty features different bands every night and can be found at hipkittyjazz.com.