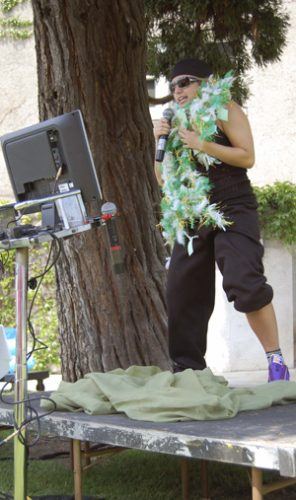 On Wednesday a “Greek Idol” competition was held during lunch in the quad as a part of ULV’s annual Greek Week festivities. Sigma Kappa senior Tiffanie Sigal was chosen to sing “2 Legit 2 Quit,” by MC Hammer as a part of the event. / photo by Jaclyn Dino

The Greek Idol competition was complete with three panel judges to determine which fraternity or sorority would take home the win.

After the performances it was announced that Phi Delta Theta was the winner, driven by Matt Dominguez and Roger Acevedo’s outstanding performances.

Each contestant got to chose their first song but their second song was chosen for them at random.

The first contestant to take the stage was Vienna Interiano, from the sorority Phi Sigma Sigma, singing “Before He Cheats” by Carrie Underwood and made the best of her second song, “Hakuna Matata” from Disney’s “The Lion King.”

“It was a lot of fun,” Interiano said. “It was definitely nerve-racking but was fun once it got started.”

The contestants rocked out on stage as their fellow brothers and sisters cheered them on. Each contestant gave the judges their best performance in hopes to win their organization points for Greek Week.

Lorriane Rodriguez of Iota Delta got an enthusiastic response from her sorority sisters as she sang “Sk8r Boi” by Avril Lavigne and the Garth Brooks song, “Friends In Low Places,” which was chosen for her.

“I was excited about it,” Rodriguez said. “I was really excited that the random song I got is one of my favorites.”

As the contest moved along, Dominguez of Phi Delta Theta took the stage.

Dominguez brought enthusiasm to the contest as he sang N’Sync hit “Tearing Up My Heart” and “Billie Jean” by Michael Jackson.

Dominguez’s fraternity brothers cheered him on by running up to the stage and singing along with him during his N’Sync performance.

“I lost my voice but my boys told me to just go up there and nail it,” Dominguez said. “And I think I did.”

He gave a lively performance during his two songs but was tired from the Greek Week process.

“I’m tired,” Acevedo said. “Greek Week is so stressful. But I had a really good time. It was a blast.”

“Everyone did a great job,” Santos said.

Santos gave praise to her sister Ali Willers who sang “Oops I Did It Again” by Britney Spears and “Under The Sea” from Disney’s “The Little Mermaid.”

“She did an amazing job,” Santos said.

Willers enjoyed being a contestant in the event.

“It was really scary,” Willers said. “It was nerve-racking but I had a lot of fun.”