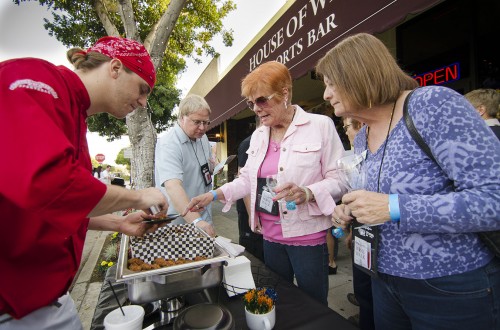 House of Wings sous-chef Justin Renauld offers Susanne St. Pierre and Toni Carone a selection of specialty wings to sample at the La Verne Wine Walk Saturday. The event brought in eight live bands to downtown La Verne, along with wine tasting, street artists and sample platters from local restaurants. The event sold out with more than 600 participants. / photo by Mitchell Aleman

The cabernet and zinfandel flowed freely Saturday at the first ever Sip of La Verne Wine Walk.

Hundreds of people walked the streets of downtown La Verne to get a look at all the restaurants, spas and small businesses the area has to offer.

From the corner of D and Second streets to the corner of Bonita Avenue and D Street, Twenty-five businesses, including Chase’s, Roberta’s Village Inn and the Smoke Shop, opened their doors, and let people of the community enjoy wine and hors d’oeuvres.

“As a community we’re just trying to boost the area,” Wild Earth Spa owner Steve Tao said. “We’re trying to help revitalize La Verne and bring people from Ontario, San Dimas and the Glendora to the area. If it goes well I see no reason why it should not happen next year and the year after that.”

The event sold more than 500 tickets before the event began.

“Within the last 10 days we had a tremendous rush,” McNerney said. “We sold a lot of tickets during the Cool Cruise the weekend before.”

With the amount of tickets that were sold at the Cool Cruise, plus an independent company that bought 50 tickets, McNerney said that by April 3rd they were completely sold out.

“I was so surprised that it sold out,” Pomona resident Leticia Ramirez said. “It was disappointing to show up wanting to participate and not being able to. But I will definitely buy my tickets ahead of time next year.”

There were 16 wine stations where people tasted a 2012 California Girl white table wine, a layer cake cabernet sauvignon and munched on chicken wings and bruschetta. The wine stations that do not normally serve food paired up with a restaurant to provide the hors d’oeuvres, and all the wine was donated or purchased by the Downtown Association.

“We came for the wine, the family and to meet up with old friends,” Rancho Cucamonga resident Yolanda Villanueva said. “All the stations are different and have a different atmosphere. None are the same, which is what I really enjoy.”

With the wine flowing the La Verne Police Department was on scene to make sure no one got out of hand. Sgt. Carl Williams said that there were no incidents reported and that it was a calm night.

There were not only wine stations, but there was also street art on almost every corner and six different music stations with live music playing. Teenagers in front of Granny’s Yogurt drew a chalk version of Lakers’ player Kobe Bryant, and across the street at Aoki’s Japanese restaurant there was a drawing of Bob Marley.

Independent artists set up tables to sell their art.

McNerney said with the success of the Wine Walk, he believes it will happen next year and if it does the city will look to expand the event, but nothing will be certain until the chamber of commerce has a wrap up meeting next week.