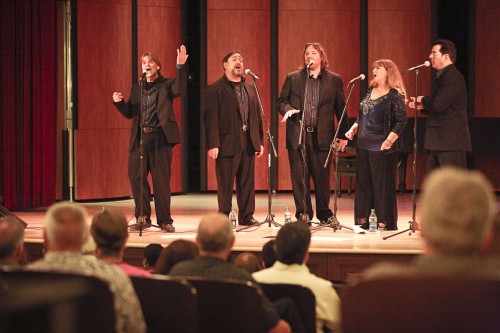 The Royals, an a cappella group self-appointed as “West coast a cappella at its best,” performs to recognize the contributors to the Morgan Auditorium renovation project. The group sang doo wop hits of the 1950s, helping the audience reminisce about life in La Verne more than a half century ago. / photo by Mitchell Aleman

The auditorium is more than 80 years old, but with the help of donors it was remodeled last year.

“This has been a dream of ours for some time,” Steve Morgan, former University president, said.

Jonathan Reed, dean of the College of Arts and Sciences, President Devorah Lieberman and Ann and Steve Morgan all gave speeches before the concert began, each thanking the donors and telling personal stories about the auditorium.

Steve and Ann Morgan talked about the seats that used to be in the theater, which had uncomfortable springs that caused back aches.

Soon after the doo wop concert started, featuring the Royals, a group of four men and one woman who used their voices rather than instruments to create music.

Except for a harmonica for tuning, the performers clapped and snapped to help keep the beat.

Three of the group members took turns singing the lead during the songs while the others doo wopped and sang in harmony.

The auditorium was filled with audience members who nodded and clapped to keep time with the music.

Every now and then the Royals would sing a more recent song from the last couple of decades. 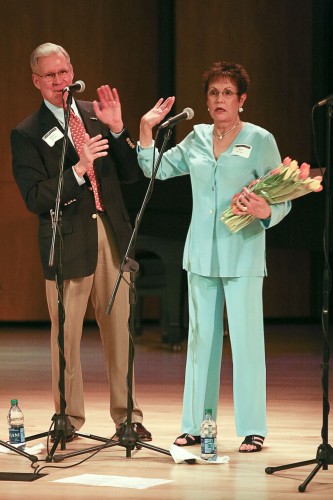 Ann Morgan hushes her husband, former ULV President Steve Morgan, during their speech in the auditorium dedicated to their service to the University of La Verne. The couple recognized and thanked the donors for the completion of the Morgan Auditorium, then enjoyed the doo-wop concert in their honor. / photo by Mitchell Aleman

The bass singer Jim Carkagis was the crowd favorite. His deep voice and doo wop noises fascinated the audience.

After a while, the band encouraged the crowd to sing along with the songs they knew, and soon almost the entire auditorium was singing along to every song.

“I was singing with them,” Joann Mac, alumna and auditorium donor, said.

The Royals sang a variety of songs, including “409” by the Beach Boys, complete with engine sounds, and “I Wonder Why” by Dion and the Belmonts.

They also performed another oldies favorite, “Why Must I Be A Teenager In Love” from Dion and the Belmonts, that had the entire audience singing.

Peter King, the musical director of the Royals, thanked the University of La Verne for inviting them to play. King was one of the original band members.

“This is a dream come true, because Ann and I love music,” Steve Morgan said.

The donors and board members were recognized and thanked for their help. The seats now have name plaques dedicated to those who donated to the auditorium renovation project.

President Lieberman reminded those present that not all seats had name plaques yet, there is an entire balcony still and more donations are always welcome.

After the concert was over, desserts were served outside the auditorium where board members, donors, band members and the rest of the audience could enjoy pleasant conversations.

“Finally, of course, we want to thank all of the donors, especially Steve and Ann Morgan,” Reed said. “Welcome home to your auditorium.”