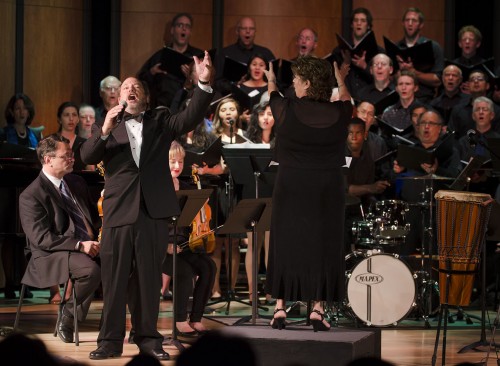 Paul Buch, cantor at Temple Beth Israel in Pomona, sings with the University of La Verne Chamber Singers during the Jewish and African-American Gospel Fusion Concert Monday in Morgan Auditorium. The concert, which included works from George and Ira Gershwin, revealed the influences of both the Jewish and African-American religious communities throughout the past century. / photo by Mitchell Alemann

The unlikely mix of George Gershwin tunes and traditional African American spiritual pieces amazed a large audience in “Gospel Fusion: Gershwin and Beyond” on Monday night in Morgan Auditorium.

“It was a fantastic program,” Pomona resident Gary Toops said. “Especially the fuse of Jewish and African American cultures.”

Artistic director and guest conductor Noreen Green of the Jewish Symphony described Gershwin, a Jewish American-born composer, as the “glue” that held together the Jewish and African American musical communities.

“(Jews and African Americans) were both really oppressed people for many years,” Hart said. “For that respect, maybe it came out in our music.”

The unexpected fusion of the two cultures provided a diverse repertoire that consisted of Gershwin’s pieces, other classical jazz compositions, traditional spiritual gospel and even an arrangement by Hart herself.

The concert kicked off with an instrumental version of Gershwin’s “Swanee,” with Green encouraging the audience to sing the lyrics along with the melody.

Buch led the choirs with his rich baritone in Gershwin’s “It Ain’t Necessarily So” from the opera “Porgy and Bess.” Green described the song as an “ingenious mix” of Jewish liturgical chant and African American scat.

An a cappella version of the traditional spiritual “Elijah Rock” showed off the harmonies and vocal capabilities of both choirs. A rhythmic “Keep Your Lamps,” another spiritual, ended with a powerful crescendo.

Hart followed with a rhythmical “Miriam,” by Elizabeth Swados, and which had the audience clapping along.

“Judah and His Maccabees,” arranged by Hart herself, showed her own jazzy interpretation of a Gospel song.

“I wanted to have fun with the story and tell it in a way that was contemporary and kind of like the way that I talk,” Hart said. “Something that would mean something to people today.”

“(It is) a fun piece,” Toops said. “It is fun to hear her interpretation as the composer.”

The closing choral portion was an epic version of another traditional spiritual, “Go Down Moses,” with Hart and Buch as soloists.

The Reed Gratz Trio opened the instrumental portion of the concert with their own arranged medley of Jerome Kern’s “All the Things You Are,” Gershwin’s “A Foggy Day” and Richard Rogers’ “My Funny Valentine.”

The grand final piece, Gershwin’s “Rhapsody in Blue,” with Zhao on piano, received a standing ovation.

“There’s nothing quite like a powerhouse piano piece to bring down the audience,” said Laguna Woods resident Karin Mayer.