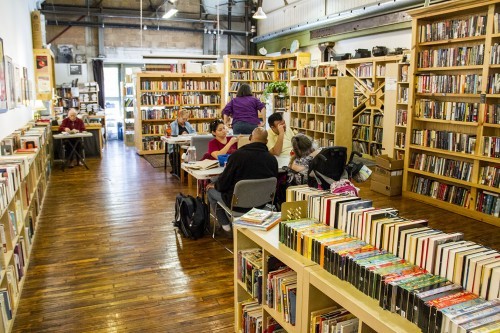 The Bookshop in the Claremont Forum, located at 586 W. First St., is home of the Nationwide Prison Library Project. The Prison Library Project is a non-profit organization where volunteers come read mail from inmates across the country and package books to be sent to them. Martha Harris, John Maull, Hugo Rocha and Monique Yateem from the First Street Gallery Art Center come every Tuesday for about an hour to volunteer and help wrap the books to be sent to the inmates. / photo by Ryan Gann

Daniel Murphy, an employee at the Forum bookstore, is busy taping a box of used books to send out to a prison later in the day. The box holds a variety of books that all have the ability to change a prisoner’s life.

This box is one of 240 that are going to be sent out this week from a small bookstore in Claremont that sends out books to prisoners nationally.

“The place we maintain and the project that we support attracts a lot of warm feelings for the customers,” Murphy said.

Murphy, a Claremont resident, is one of the few employees at the bookshop. He started off as a volunteer and within a year his passion and knowledge of the store promoted him to become an employee.

In 1986, Rick Moore founded the project in Claremont to give prisoners the chance to educate and entertain themselves while incarcerated.

“It started as an idea near and dear to Rick Moore’s heart,” Murphy said.

Books are sent to prisons across the nation, not just locally like most prison library projects. But because Alaska and Hawaii have such high postage rates, books are never sent to those locations.

Throughout the years, the project has grown in size and in volunteers. The bookshop moved about five years ago from the old Claremont Courier building.

Many volunteers at the bookshop are former prisoners who have benefited from the project through their time in prison.

Students are also welcome to volunteer at their convenience since the bookshop has a steady flow of volunteers at all times.

“Through books people on the inside, people that are surrounded by concrete walls and razor wire have a method of connecting with the outside world,” said volunteer and ex-prisoner Steve Bell. “If they become a part of the outside world, I think the transition back to that is easier.”

Today, the Prison Library Project receives letters from about 300 prisoners, across the nation, a week requesting certain types of books or certain books.

Donating books is not the only way that customers contribute to the packages sent. The profits that the bookshop gathers is used to buy books that prisoners request that are not in stock.

The Forum bookshop has recently attracted a lot of attention in the local area. Pitzer College produced a short film “Inside the Prison Library Project” highlighting the volunteers, employees, and the cause. The film was shown at a film festival in Claremont.

The University of La Verne also contributes to the project under the guidance of the College Republicans Club.

“Our students met this summer to think about what type of service projects they might be interested in,” said business professor and Republican club adviser Constance Rossum. “They were looking for something meaningful and changing the lives of the incarcerated certainly fits that bill.”

The original goal for the club was to gather 1,000 books by the end of the year, but at this time they have already surpassed the goal with over 1,200 books donated, Rossum said.

Due to the success of the program the club has decided to return with it in the fall of 2014.

Donations are still being accepted in the library in a book drop box and at the Forum Bookshop in Claremont.

Rachel Sandoval can be reached at rachel.sandoval@laverne.edu.